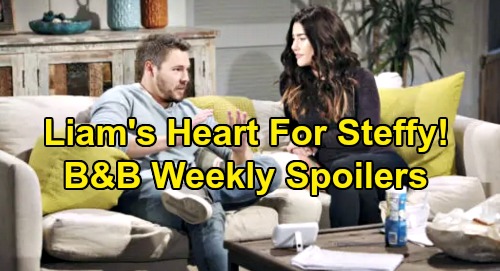 The Bold and the Beautiful (B&B) spoilers for the week of January 13 to January 17 tease that some surprises are in store. First, let’s talk about Katie Logan’s (Heather Tom) call for a meeting. She’ll round up her friends and family members with a specific goal in mind.

B&B fans can expect Katie to make a significant request. Could it be one about letting go of the past and accepting “Flo” Fulton (Katrina Bowden)? We’ll have to wait and see, but Flo will indeed be back in the week ahead. It won’t be long until Flo faces Wyatt Spencer (Darin Brooks), who’ll have a big reaction to seeing his ex again.

The Bold and the Beautiful spoilers say Wyatt will struggle with familiar feelings. He’s had a hard time feeling settled in his relationship with Sally Spectra (Courtney Hope) lately. Their engagement will be at risk after Wyatt speaks with Flo and perhaps realizes he can’t fight their old connection.

Later, Wyatt will have to reject a lovely lady wearing only lingerie. It doesn’t sound like it’ll be Flo, so that leaves Sally. Her romantic plans could be a flop if Wyatt turns down making love and prepares to break things off instead. Wyatt will indeed have a split in mind soon, but this will prove more difficult than he expected.

Other Bold and the Beautiful spoilers say Hope Logan (Annika Noelle) will lean on Brooke Forrester (Katherine Kelly Lang). She’ll break down in tears as she tells her mom about witnessing a kiss between Liam Spencer (Scott Clifton) and Steffy Forrester (Jacqueline MacInnes Wood). As you can imagine, Brooke will be appalled with both of them.

This will also lead to more issues with Ridge Forrester (Thorsten Kaye), who believes Steffy belongs with Liam instead of Hope. As for Liam himself, he’ll make a huge admission – possibly one that reveals what’s in his heart when it comes to Steffy.

Next, Brooke will face a shocker that most likely relates to Shauna Fulton (Katrina Bowden). That’ll spark a war between Brooke and Shauna’s bestie, Quinn Forrester (Rena Sofer).

The Bold and the Beautiful spoilers say Quinn will be on Shauna’s team all the way. She’ll think it’s time for Ridge to put Brooke in the rearview mirror and focus on a fresh start with the new woman in his life.

Shauna will naturally be part of this bitter battle and so will Eric Forrester (John McCook). After the fighting spirals out of control, Eric will intervene and hope he can convince them all to start acting like adults.