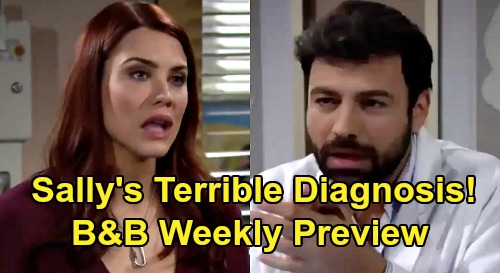 The Bold and the Beautiful (B&B) spoilers preview for the week of January 27-31 teases that some hot drama’s ahead. Before we talk about the weekly preview video, we should note that impeachment trial coverage could affect the show’s schedule. More episodes may be pushed back, but these B&B spoilers will hit the screen sooner or later.

With that in mind, let’s dive in! The Bold and the Beautiful spoilers say Sally Spectra (Courtney Hope) will decide she needs to see a doctor. She’s been dealing with some troubling symptoms, so she’ll hope this appointment will help. Sally will just want to get to the bottom of things and hopefully figure out what’s going on.

However, Sally will eventually admit her concerns run deep. She’ll suggest she can’t pretend anymore and will be truly afraid this is something serious. The Bold and the Beautiful spoilers say Sally will speak with her doctor as well as Katie Logan (Heather Tom). It looks like after some test results come back, Katie will join Sally for moral support.

Sally’s set to receive a terrible life-changing diagnosis, which Katie will ultimately become privy to. Since Sally will be going through so much, Katie will think Sally should lean on Wyatt Spencer (Darin Brooks). She’ll insist Wyatt would want to be there for Sally in her time of need.

Nevertheless, Sally will hastily dismiss that idea. She’ll declare that Wyatt is the last person she would want to know. Sally will point out that Wyatt broke off their engagement to be with “Flo” Fulton (Katrina Bowden) – or at least tried to. She won’t want Wyatt’s pity, so she’ll make Katie promise to keep quiet.

Thanks to the breakup and this devastating diagnosis, Sally will shut Wyatt out. She’ll leave Wyatt with growing concerns about how much he’s hurt her.

Wyatt won’t realize Sally’s problems are far worse than a split. He’ll sense that Sally isn’t being honest, but he won’t be able to nail down anything specific.

Wyatt will have no choice but to assume he’s the sole reason for Sally’s pain. He’ll wind up talking to Katie about Sally, which could be tricky. Wyatt will admit he cares about Sally so much and hopes she’s OK.

Katie will look uneasy, so it could become tougher for her to keep Sally’s secret! The Bold and the Beautiful spoilers say some exciting scenes are on the way, so stay tuned. We’ll give you updates as other B&B news comes in. Stick with the CBS soap and don’t forget to check CDL often for the latest Bold and the Beautiful spoilers, updates and news.