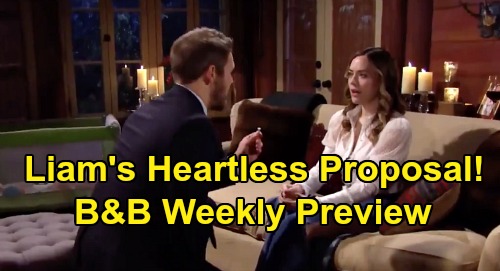 The Bold and the Beautiful (B&B) spoilers preview promo for the week of January 6-10 tease that Hope Logan (Annika Noelle) will be stunned by a proposal. In B&B’s weekly preview video, Liam Spencer (Scott Clifton) gets down on one knee and asks Hope to marry him.

He begs Hope to say yes, but it turns out there’s a major stipulation involved. Liam will want to fully commit to a future with Hope, but he won’t think that future should include legal custody of Douglas Forrester (Henry Joseph Samiri).

In Liam’s mind, that’ll always give Thomas Forrester (Matthew Atkinson) power over Hope and a tool he can use for manipulation. Liam can’t accept the idea of Hope and Thomas co-parenting like this forever.

With that in mind, Liam will make his condition clear. He’ll assure Hope that he truly wants to marry her and continue building this life together. Liam will also indicate that Douglas can still be part of the picture – just not legally.

He’s not trying to keep Hope from bonding with Douglas, but he’ll feel like Hope has taken this too far.

The Bold and the Beautiful spoilers say Hope will break down in tears over Liam’s ultimatum. She’ll try to change his mind since Douglas means the world to her, but Liam will insist he can’t keep doing this. He’ll walk out on Hope and leave her calling out to him in the night. 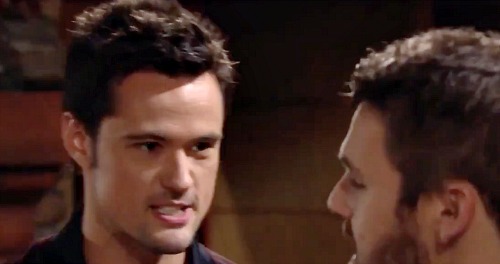 As for Thomas, he’ll be absolutely livid when he gets updates on Liam’s stipulation. B&B fans can expect a fierce faceoff as Thomas confronts Liam about what he’s trying to pull.

Thomas will think it’s appalling for Liam to try and force Hope to cut ties with Douglas. He’ll snarl about how much his son means to Hope, but Liam will decide he’s heard enough.

The Bold and the Beautiful spoilers say Liam will lunge forward and give Thomas a hard shove. It’ll rev up their war even more and set Thomas’ next plan in motion.

Steffy Forrester (Jacqueline MacInnes Wood) will ultimately be nudged into making her move with Liam. Thomas will make some arrangements and feel confident Hope’s going to witness a kiss between “Steam.”

Thomas’ plan will work like a charm when Hope faces devastation over the looming lip lock.

It sounds like some serious excitement’s brewing, so don’t miss what’s in store. We’ll keep you posted as other B&B news comes in. Stay tuned to the CBS soap and don’t forget to check CDL often for the latest Bold and the Beautiful spoilers, updates and news.