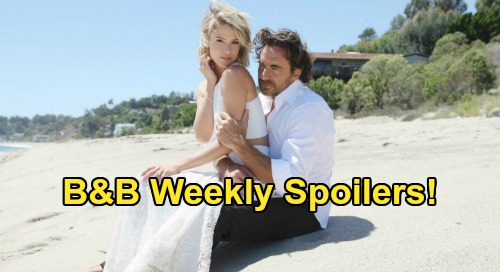 Monday’s episode is one that originally aired in 2014. Wyatt Spencer (Darin Brooks) convinces Hope Logan (Kim Matula) to follow her heart and do what feels right. Hope decides she’s all in, so she marries Wyatt in an impulsive ceremony on the Stella Maris. Wyatt is certainly an over-the-moon groom in this romantic encore!

On Tuesday, The Bold and the Beautiful’s throwing it back to 2015. Maya Avant (Karla Mosley) determines that she won’t let her father, Julius Avant (Obba Babatunde), get in the way of her happiness. Instead of putting the wedding on hold because of Julius’ outburst, Maya insists on marrying Rick Forrester (Jacob Young) as planned.

Later, Caroline and Ridge exchange heartfelt vows in a moment alone. City hall can take care of the rest eventually; this is just about “CaRidge” coming together.

On Thursday’s 2016 episode, Ridge feels confident Eric Forrester (John McCook) will call off his marriage to Quinn Fulton (Rena Sofer). The Forresters boycott the ceremony in protest, although Ivy Forrester (Ashleigh Brewer) shows up as a lone supporter.

Quinn doesn’t want Eric to lose his family over her, so she tells him not to marry her. Of course, Eric assures Quinn of his love and marries her anyway.

Quinn and Eric have managed to make their marriage last, but we’ll see if that’s still true when new episodes return. In the meantime, let’s talk about Friday’s 2018 encore. Steffy Forrester (Jacqueline MacInnes Wood) has important updates for Ridge in this exciting show.