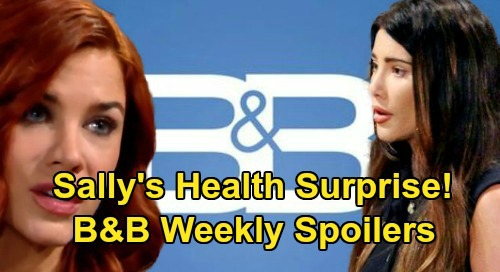 The Bold and the Beautiful (B&B) spoilers for the week of March 16 to March 20 tease that some shockers are in store. After all the wedding drama winds down, Steffy Forrester (Jacqueline MacInnes Wood) will have a confession to make. Despite Thomas Forrester’s (Matthew Atkinson) public exposure, part of Ridge Forrester (Thorsten Kaye) may try to defend his son.

Ridge might argue that Thomas was manipulated or find some other way to twist all this around. However, Steffy’s admission should seal the deal on Thomas’ true intentions. He orchestrated that kiss between Steffy and Liam Spencer (Scott Clifton).

Thomas wanted to make sure Hope Logan (Annika Noelle) saw it, which he knew would blow up “Lope.” If Ridge is indeed clinging to some last hope that Thomas has changed, that should fully confirm that he’s wrong.

The Bold and the Beautiful spoilers say Thomas will no longer be a point of contention between Ridge and Brooke Forrester (Katherine Kelly Lang), which means “Bridge” will officially be back on. They’ll share a heartfelt reunion, which will probably lead to some steaminess, too.

Over with Liam and Hope, they’ll enjoy their own recent reunion. Douglas Forrester (Henry Joseph Samiri) will be on board with this united “Lope” family. B&B fans can expect Douglas to put together a fun surprise for Liam, Hope and even Beth Spencer (River Davidson and Madeline Valdez).

It’ll be nice to see Douglas enjoying himself instead of being used as twisted Thomas’ pawn. The Bold and the Beautiful spoilers say Douglas will show his crafty side, but that’s probably a bit of fun wordplay.

It seems likely Douglas will make some sort of drawing or other artwork that shows how happy he is about the “Lope” fam. As for Thomas, he’ll be left to fume and sulk after all his plans go up in smoke. Thomas should really be in a dark place after the wedding bombs drop and his life explodes.

Next, Shauna Fulton (Denise Richards) will share something interesting with Quinn Forrester (Rena Sofer). The Bold and the Beautiful spoilers say Quinn’s ears will perk up over some surprising news that could affect Ridge’s future.

This could be what leads to Quinn’s shocking ammo the following week, which will surely involve finding out about that kiss Brooke and Bill Spencer (Don Diamont) shared.

B&B viewers will also see Sally Spectra (Courtney Hope) concentrate on Wyatt Spencer (Darin Brooks) instead of her health. Despite Wyatt’s questions, Sally will refuse to divulge her terminal diagnosis just yet. Sally will ignore Dr. Escobar’s (Monica Ruiz) flurry of text messages and choose to live in the moment with the man she loves.

Nevertheless, Dr. Escobar will apparently have some vital updates to share. She’ll be determined to reach her patient, so Sally will have to get in touch eventually. This is all building to Sally’s confession down the road, which will bring some emotional scenes. Stop by CDL regularly for exciting Bold and the Beautiful spoilers, news and updates.