The Bold and the Beautiful Spoilers: Who Is Ridge Forrester’s Best Romantic Match? 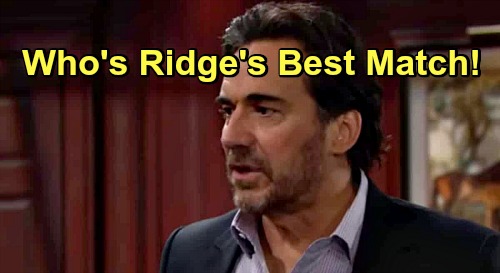 The Bold and the Beautiful spoilers tease that Ridge Forrester (Thorsten Kaye) currently appears to have two options. Brooke Logan (Katherine Kelly Lang) loves him, while Shauna Fulton (Denise Richards) is resisting the urge to begin a relationship he wants to begin exploring.

However, devoted B&B fans know that the one-time Taylor Hamilton (Hunter Tylo) married Ridge a few years before Brooke first did. Taylor hasn’t been seen since last year, but remains another option for Ridge because she loves him as well.

Bold And The Beautiful Spoilers – Rebooting Once Great Couple

Tidge, or Raylor if one prefers, were first married from the early to mid 1990s and then remarried from the late 1990s through the mid 2000’s. Their relationship is fully complex, with Ridge not exhibiting any detectable desire to be with her again. But circumstances and the draw of their family’s history can change within a handful of episodes.

Ridge has long referred to Brooke as Logan. His fond use of her maiden name as a nickname is just one example of their unique connection.

Starting in the mid 1990s and stretching through today, Bridge has been married eight times and has a son, R.J. Forrester (Anthony Turpel). The multiple ties and their child provide clear evidence of love.

Some entertainment fans might have thought of film icon Elizabeth Taylor, as she married eight times during her real life. Hardcore daytime fans know that Taylor played Helena Cassadine on General Hospital in 1981, as part of Luke Spencer (Tony Geary) and Laura Spencer’s (Genie Francis) famous wedding that set historic soap opera ratings records. Taylor also had an uncredited appearance as a cleaning lady on All My Children in 1984, which was part of a light-hearted, on-air prank she played on Carol Burnett (Verla Grubbs).

There’s no way to legitimately say that Brooke isn’t Ridge’s best love match, based on this couple’s extensive backstory. Clearly they care for each other, but haven’t yet found a way to stay together permanently.

Bold And The Beautiful Spoilers – Shauna Fulton Might Be The Favorite

Shauna is different than Taylor, or Brooke. Even though Ridge has only known Richards’ character for a matter of months, Shauna stands as a dark horse threat to become his best romantic match.

Viewers have only seen the surface of scripts that can be created for this potentially emerging couple. If Shidge is established, Shauna would also project as Brooke’s lasting rival.