The Bold and the Beautiful Spoilers: Will Sally & Penny Conspire To Murder Flo and Get Rid of Body – Desperados Go to Extremes? 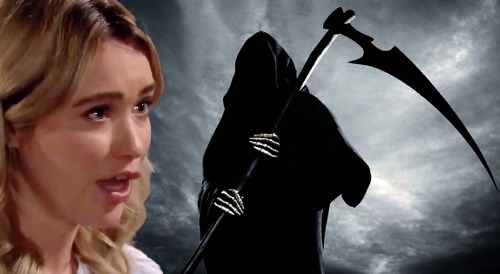 The Bold and the Beautiful (B&B) spoilers tease that Flo Fulton (Katrina Bowden) will find herself in serious trouble. As B&B viewers know, Flo has just peeked at Sally Spectra’s (Courtney Hope) medical records on Dr. Penny Escobar’s (Monica Ruiz) laptop. And while it’s unclear exactly what Flo saw, there’s a pretty good chance that she saw Sally’s actual diagnosis, which was some type of stress-related problem, and not a terminal illness.

Well, according to B&B spoilers, Flo will end up confronting Sally in a big way at the beach house. Flo will have some sort of plan in place to trick Sally into giving up that she’s been faking her terminal illness.

A big argument will ensue, with Flo coming out and accusing Sally of being a fraud. And it looks like Sally will come right out and admit her fake death ruse.

But there’s a lot more that’s going to go down. According to B&B spoilers, Penny will end up at the beach house as well, and it’s going to be quite the scene between Flo, Sally, and Penny. But Penny will shock the heck out of Sally when she hits Flo over the head and knocks her unconscious!

Sally will realize in an instant that Penny is unstable and dangerous, and now she’ll have a real situation on her hands. There Sally will be, in Wyatt’s home with Penny and an unconscious Flo on the floor, potentially severely harmed. And Sally and Penny will know that it’s only a matter of time before either Flo wakes up or Wyatt Spencer (Darin Brooks) returns to the beach house.

As it turns out, Wyatt will be over at Forrester Creations meeting with Quinn Forrester (Rena Sofer) and Katie Logan (Heather Tom). Wyatt will be lamenting about his situation and whether he should really be asking Sally to leave the beach house and move into a medical facility, and he’ll have no idea what’s going on back at his place.

It’s a terrible thought, but we could see Sally and Penny decide to dig in and make sure that there’s no way Flo is going to wake up and turn them in for they crimes. Could Flo’s life be at risk?

Sally’s been wanting Flo out of the picture for a while now, and now Flo is standing directly in the way of Sally’s plan working. And now Penny will have just physically assaulted Flo. Might Sally and/or Penny float the idea that they murder Flo and permanently get rid of her body?

Given the type of choices that Sally has been making lately, and given the fact that Penny will have just physically assaulted Flo, we wouldn’t put it past either of them to think about getting rid of Flo.

No matter what happens, though, Sally and Penny are going to have to make some split-second decisions about how to handle their problem, as B&B spoilers say that Wyatt will return to the beach house!

What happens from here remains to be seen, but we could see a situation in which Sally and Penny somehow get rid of Wyatt to buy more time while they decide what they’re going to do with Flo.

Do you think that Sally and Penny would go so far as to kill and permanently get rid of Flo? Stay tuned to B&B and remember that CDL is here with all of your Bold and the Beautiful spoilers, daily recaps, and news.