The Bold and the Beautiful Spoilers: Will Steffy Get Pregnant by Dr. John ‘Finn’ Finnegan – Time For Second Child? 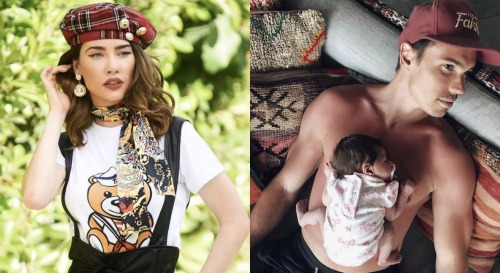 The Bold and the Beautiful (B&B) spoilers tease that Steffy Forrester (Jacqueline MacInnes Wood) will face some big changes in her life when new episodes return. B&B viewers know Steffy and Hope Logan (Annika Noelle) have been at war over Liam Spencer (Scott Clifton) for years. There have been times of peace, but it always seems to come back to more conflict and more battling for Liam.

Thankfully, The Bold and the Beautiful spoilers say Steffy’s heading in a brand-new romantic direction. Tanner Novlan will make his first appearance as Dr. John “Finn” Finnegan once B&B starts airing new episodes again. Steffy will eventually meet this hunk, who’s been cast specifically with her in mind.

That’s a great sign about Steffy’s chances at happiness with Finn, who’ll hopefully be a good match for her. If all goes well, Finn and Steffy will find themselves hitting the sheets sooner or later. They may become a long-term couple with a solid shot at family bliss.

Will Steffy’s new love interest lead to a pregnancy and another baby down the road? Will Finn give Kelly Spencer (Avalon and Colette Gray) a brother or sister? Steffy adopted “Phoebe Forrester” aka Beth Spencer (River Davidson and Madeline Valdez) with the goal of giving Kelly a little sis and completing their family.

Beth is still Kelly’s sister since they share Liam as a father, but Steffy sadly lost her second daughter.

The bogus adoption exposure was a tough blow for Steffy, so many Bold and the Beautiful fans would like to see her have another child – perhaps a biological one with Finn! It’s a good possibility to ponder since B&B seems all in on Finn as Steffy’s new man.

Of course, there’s no rush on putting a bun in the oven with Steffy getting pregnant. Steffy should take her time getting to know Finn and falling for him first. We want to see all the fun dating moments that The Bold and the Beautiful has to offer.

However, a baby storyline would be nice at some point. That just might seal the deal on Finn and Steffy as a couple that lasts! As other news and updates become available, we’ll bring you all the details.