The Bold and the Beautiful Spoilers: Will Steffy Tell Finn The Truth – Liam Bombshell Changes The Game? 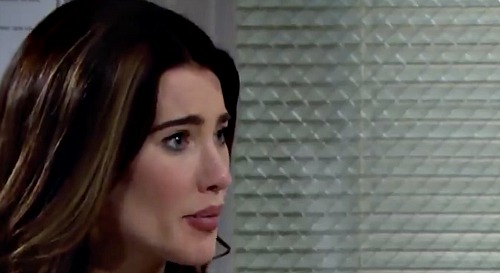 The Bold and the Beautiful spoilers tease that Steffy Forrester (Jacqueline MacInnes Wood) had no initial desire to tell John Finnegan (Tanner Novlan) what happened between her and Liam Spencer (Scott Clifton). Whether she’ll retain that outlook is part of the unfolding plot on B&B.

Steffy did not see this coming. But Liam’s latest me-first rant caused her to believe that Steam had a chance to revive. Of course, Steffy, like Liam, was inebriated at the moment that sloppy statement was made.

Fans took note that Steffy and Liam weren’t mortified by what they’d done. They rationalized it and then began talking the topic to death, which is their bent.

In their minds what happened was just one of those explainable things. They absolved themselves of any wrongdoing because their feelings of the moment were mixed with alcohol.

The Steffy and Liam rationalization effect was in play once again, as all viewers saw. This pairing has employed the mental technique whether they were together, or apart in the past.

The problem with their joint conclusion, as has been true before, is that lives beyond their own are impacted.

Bold And The Beautiful Spoilers – To Tell The Truth

This subject header is a wink at the old school game show, ‘To Tell the Truth,’ that’s been revived in recent years. In terms of Steffy and Liam, their ability to manage this serious contest will now be tested.

Steffy could choose to go to Finn, when Thomas Forrester (Matthew Atkinson) is stabilized, and just tell him what happened at the cliff house with Liam. Finn would likely be hurt and angry.

While disillusionment and the chance for Sinn to permanently break exists, not coming forward risks a deeper offense.

Bold And The Beautiful Spoilers – Steffy Keeping A Dirty Secret

If Steffy doesn’t tell Finn, then he’s bound to hear the truth from someone else, or learn it accidentally. That would absolutely be more devastating then if Steffy is honest with him.

The dirty secret that Steffy and Liam share can’t be wished await, but can be overcome with a humble admission and a request for forgiveness. Finn is a good-hearted guy. So, he might be willing to believe that his relationship with Steffy can progress.

But one secret compounded by withheld information, which is another form of lying, would probably fate this likable couple to a breakup. And this assumes that Steffy won’t learn that she’s pregnant with Liam’s child either.