The Bold and the Beautiful Spoilers: Wyatt Belongs with Hope, Not Flo – Paired with Wrong Logan, Romantic Shakeup Needed

BY Heather Hughes on May 6, 2020 | Comments: Leave Comments
Related : Soap Opera, Spoiler, Television, The Bold and the Beautiful 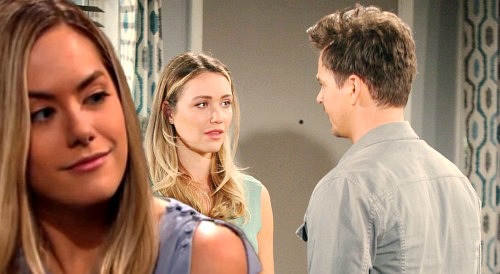 The Bold and the Beautiful (B&B) spoilers reveal that many fans are baffled by the show’s commitment to Wyatt Spencer (Darin Brooks) and Flo Fulton (Katrina Bowden) as a pairing. B&B went to great lengths to build Flo and Wyatt up as some grand love story. The writers invented this high school sweetheart connection just to deepen things and speed up the couple process.

Steffy Forrester (Jacqueline MacInnes Wood) ultimately had to give up the baby she’d come to think of as her daughter, so she suffered, too. Wyatt cared about all the affected parties here, including his niece, Beth Spencer (River Davidson and Madeline Valdez). Flo wasn’t the ringleader of the stolen baby plot, but she had the power to end it all along.

Wyatt moved past Flo’s part in the scheme awfully fast – too fast for some fans’ taste! It was nice of Flo to sacrifice a kidney for Katie Logan’s (Heather Tom) sake, but Flo’s redemption plot served another attempt to make Wyatt and Flo happen.

Why put all this effort into such a lackluster pairing? Plenty of viewers just don’t feel like Flo and Wyatt as meant to be as B&B wants us to believe. Sally Spectra (Courtney Hope) could’ve had a lovely story where she beat the odds and conquered a seemingly incurable illness. Perhaps Wyatt would’ve slowly fallen back in love with Sally as he was reminded of her strength and perseverance.

But no! We can’t have Saint Flo look bad, so there goes Sally under the bus. The Bold and the Beautiful went with a twist that made Sally the villain of this storyline. Now Sally looks crazy, desperate and pathetic – and that’s just not the Sally fans have come to know. Sally’s character took a hit because they wanted Flo to be the love interest to root for.

Sadly, that plan hasn’t worked as far as many viewers are concerned. Instead of focusing all this time and energy on pairing Wyatt with Flo, why not put Wyatt back with Hope? Liam has another option in Steffy Forrester (Jacqueline MacInnes Wood), so he’d still have someone to love.

Wyatt and Hope have history that’s played out onscreen. They lost a child together, and there’s always going to be the potential for more brother battles with Liam. It seems like a no-brainer to explore a Hope and Wyatt reunion, but B&B’s stuck on this Wyatt and Flo idea instead.

Wyatt’s with the wrong Logan! He needs to fall for Flo’s cousin again and hopefully rebuild a love story fans can get behind. Do you think Hope and Wyatt are a couple worth revisiting? Should Wyatt dump Flo and get back together with Hope? We’ll pass along updates as other B&B news becomes available.