The Bold and the Beautiful Spoilers: Wyatt Breaks Up With Flo – Stands by Sick Sally, Falls Back In Love – Illness Brings ‘Wally’ Reunion? 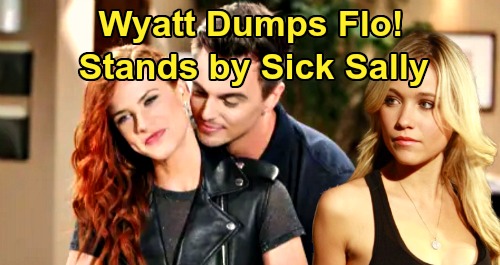 The Bold and the Beautiful (B&B) spoilers tease that Wyatt Spencer (Darin Brooks) will grow increasingly concerned about Sally Spectra (Courtney Hope). He knows he hurt Sally when he decided to break off their engagement – so much so that Sally hasn’t even accepted it yet! It’ll take a bit longer for Sally to wrap her head around Wyatt dumping her yet again.

However, Sally will eventually come to grips with the end of their relationship. She’ll have a far bigger problem to focus on anyway: her health. The Bold and the Beautiful spoilers say Sally will head to the doctor and share her alarming symptoms.

Sally will talk about how she gets dizzy sometimes and struggles with shaking. Sally will just wonder what the heck’s going on and how to fix it.

Unfortunately, it appears Sally’s condition is quite serious. She’ll get a diagnosis with Katie Logan (Heather Tom) by her side, but she’ll refuse to let Katie to divulge it to anyone – especially Wyatt.

Of course, it won’t take long for Wyatt to realize there’s a secret. He’ll feel like Sally’s keeping something huge from him, so he’ll be on a mission to solve the mystery.

Wyatt cares about Sally too much to just ignore this. The more Sally pushes Wyatt away, the closer he’ll try to pull her. Wyatt won’t be able to move on with “Flo” Fulton (Katrina Bowden) when Sally seems so upset and unsettled.

That might annoy Flo a bit in the coming weeks. She may feel like Wyatt just needs a clean break – one that would allow them to have their own fresh start as a couple.

Nevertheless, Wyatt will keep at it and will likely uncover Sally’s secret eventually. No matter what Sally’s shocking diagnosis is, you can bet Wyatt will want to support her.

The Bold and the Beautiful spoilers say this will lead to a very moving story all around. Wyatt seems certain that he wants a future with Flo, but he may not be so sure for long!

Will Sally’s illness lead to more heartbreak for Flo? That probably depends on whether Sally lives or dies, but this experience could end well for Sally if he survives.

Sally honestly deserves better than Wyatt, but she’s crazy about him and wishes they could get their life together back on track. This story obviously presents an opportunity for Wyatt to fall back in love with Sally and break up with Flo.

Many B&B fans still haven’t forgiven Flo for the pain she caused during the baby swap mess. She gave Katie a kidney, but was that enough?

Maybe Flo could stand to suffer a bit more for what she did. If Wyatt and Sally are the endgame couple here, it’d be great news for “Wally” fans and Flo haters alike!