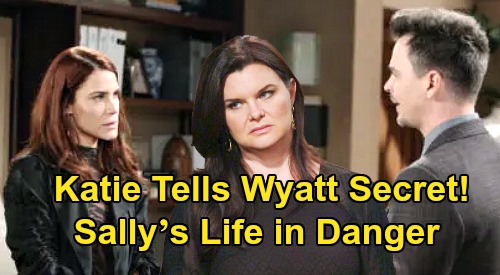 The Bold and the Beautiful (B&B) spoilers tease that Katie Logan (Annika Noelle) will find herself in a tight spot. Sally Spectra (Courtney Hope) is set to receive a crushing diagnosis – and Katie will be right by her side when it happens. Monica Ruiz will debut as Dr. Escobar, Dr. Pappas’ (Andreas Georgiou) colleague and presumably a specialist of some sort. Dr. Escobar will be the one who breaks this devastating news.

Once Sally has a chance to wrap her head around her diagnosis, she’ll push Katie to keep her mouth shut. B&B spoilers say Sally will plan on suffering alone, but Katie will struggle to let that happen. Despite Sally’s insistence that no one – especially not Wyatt Spencer (Darin Brooks) – can know the truth, Katie will spill the big secret.

The Bold and the Beautiful spoilers say Katie will start with Bill Spencer (Don Diamont), who’ll respond with compassion. Once Katie tells Bill what Sally’s up against, even he may agree Wyatt should hear about it.

Regardless, Katie will decide to go against Sally’s wishes. She’ll come clean to Wyatt about the tough battle Sally’s facing – one that could potentially end her life.

Wyatt’s heart will be shattered when he realizes how much Sally’s dealing with. He recently chose Flo Fulton (Katrina Bowden), so he’ll hate that he dropped that on Sally at the worst possible time.

The Bold and the Beautiful spoilers say Wyatt will want to reach out after he learns what’s up. He’ll think Sally should know she’s not alone in this fight, but Sally will likely continue to push him away.

Of course, this could lead Wyatt to reevaluate a few things in terms of his future. Sally would never want Wyatt to reunite with her out of pity, but this could turn into something more. Will it reawaken Wyatt’s deep love for Sally? Will the thought of losing Sally change Wyatt’s mind about picking Flo?

The Bold and the Beautiful spoilers say this love triangle will bring some twists, turns and touching moments. Once Wyatt knows Sally’s life is in danger, he’ll definitely want to extend his support – and he won’t stop until she accepts it!

We’ll give you updates as other B&B details emerge. Stay tuned to the CBS soap and don’t forget to check CDL often for the latest Bold and the Beautiful spoilers, updates and news.