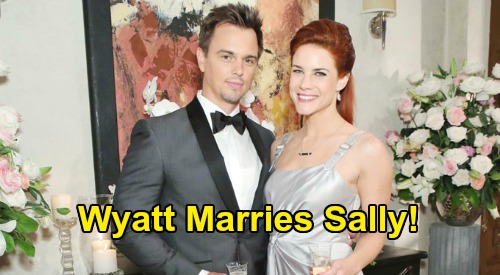 The Bold and the Beautiful (B&B) spoilers tease that Thomas Forrester (Matthew Atkinson) is in for a rude awakening. He’ll decide it’s time to get this marriage show on the road – and it is indeed a show! B&B fans know Thomas is just using Zoe Buckingham (Kiara Barnes) as a steppingstone on his way to a future with Hope Logan (Annika Noelle).

However, some shockers and shakeups are brewing in this storyline. It looks like Zoe may finally wise up with a little help from Carter Walton (Lawrence Saint-Victor) and Steffy Forrester (Jacqueline MacInnes Wood). Zoe might realize she’s been manipulated like they claim and decide enough is enough.

Regardless, Thomas is set to get a surprising comeuppance at his nuptials. Although the wedding will begin, it doesn’t sound like it’ll be completed. Whether Zoe blows it up or it blows up another way, Thomas and Zoe probably won’t be getting married that day.

Could another duo get married instead? If The Bold and the Beautiful wants to offer a real twist here, they’ll certainly have the opportunity to. Everyone will be gathered for a wedding, so why let it go to waste?

Since Sally Spectra (Courtney Hope) is dying, maybe Wyatt Spencer (Darin Brooks) will decide to marry her on the spot. It’d fit with other Bold and the Beautiful spoilers about Wyatt trying to make all Sally’s dreams come true before her death. Marrying Wyatt is definitely a dream of Sally’s – one that he has the power to make come true.

The Bold and the Beautiful spoilers, updates and news say Sally stands a good chance of beating this deadly illness. Things may look bleak right now, but it’s too simple for B&B to kill Sally off.

Just imagine if Wyatt marries Sally thinking she only has a few weeks left. If Sally dies, so what? It’s sad, but nothing really happens. If Sally lives, that’s drama! It complicates things with Flo Fulton (Katrina Bowden).

Do you think Wyatt and Sally might piggyback on this wedding ceremony? After Thomas and Zoe fail to tie the knot, everything will still be in place for some sweet nuptials. Perhaps Wyatt will make another sacrifice in hopes of giving dying Sally true bliss.

B&B viewers will look forward to all the bombshells ahead. We’ll bring you the latest news as other Bold and the Beautiful spoilers and updates emerge, so stop by CDL often.