The Bold and the Beautiful Spoilers: Wyatt Trapped in Reunion After Sally Survives – Cheats with Flo, Sets Up More Heartbreak?

BY Jessica Jones on February 23, 2020 | Comments: one comment
Related : Soap Opera, Spoiler, Television, The Bold and the Beautiful 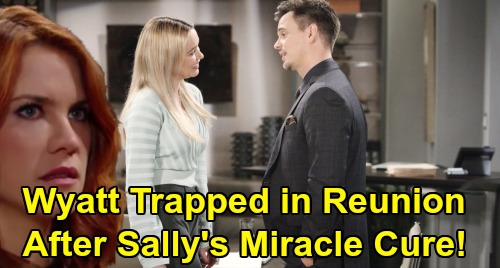 The Bold and the Beautiful (B&B) spoilers tease that Wyatt Spencer (Darin Brooks) may land in a tight spot. During the week of February 24-28, Wyatt will have a heart-to-heart with Flo Fulton (Katrina Bowden) about what’s next. Flo will urge Wyatt to be with Sally Spectra (Courtney Hope) during the time she has left. She’ll think Wyatt should just try to make Sally happy in these final weeks.

What happens if those weeks become months? This Bold and the Beautiful storyline seems to be headed in that direction. In fact, it’s looking a lot like Sally could miraculously survive. Although Wyatt would be thrilled to know Sally has many years left to live, that would also present a bit of a problem.

Wyatt could potentially marry Sally thinking she’s going to die anyway. After all, that would make Sally happy – which is what B&B spoilers say Flo will push for. Flo might put her full support behind a wedding under the assumption that they’d barely even have time for a honeymoon. She fully expects to be with Wyatt once Sally quickly fades away.

However, The Bold and the Beautiful spoilers, updates and news say Sally will at least survive past the one-month mark her doctors predicted. Will a cure save Sally and leave her eager to live a long life with Wyatt? It could be tough for Wyatt to look Sally in the eyes and dump her…AGAIN.

This poor girl has already been through so much, so Wyatt may hate the idea of piling on more. He may not want to break Sally’s heart after she beats an illness that could’ve killed her. In other words, Wyatt may feel trapped.

Unfortunately, soap characters who feel trapped in relationships tend to stray. They often drift toward those they’re pining for, so Wyatt could easily slip up and cheat with Flo.

There’s clearly a strong connection between Wyatt and Flo or else he wouldn’t have been able to forgive her role in the baby swap scheme. They’re high school sweethearts who keep finding their way back to each other, so they may battle temptation.

Will Wyatt’s bond with Flo cause issues in his reunion with Sally? Will Wyatt stay with Sally out of obligation and end up cheating with Flo? Wyatt could be setting Sally up for more heartbreak! We’ll have updates as other B&B news rolls in, so pop in often for the latest Bold and the Beautiful spoilers.