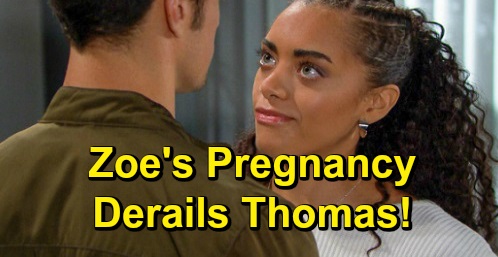 The Bold and the Beautiful (B&B) spoilers tease that Thomas Forrester (Matthew Atkinson) will feel like he’s so close to getting what he wants. Thomas will continue to use Douglas Forrester (Henry Joseph Samiri) to his advantage in the coming B&B episodes. The more upset Douglas gets about his romance with Zoe Buckingham (Kiara Barnes), the more concerned Hope Logan (Annika Noelle) will be.

Of course, that’s exactly what Thomas is counting on. He’s hoping Douglas’ anxious reaction will have a profound effect on Hope – and it looks like his wish will be granted. Hope could be on the verge of seeing the value in a united “Thope” family. Thomas still has a few more twisted moves to make, but he’ll feel confident he’s in the homestretch. He’ll believe victory is just around the corner.

What does that mean for Zoe? Thomas likes Zoe well enough, but she’s just a pawn in his game. They have fun and enjoy each other’s company, but Hope is still the only woman for Thomas. Although Thomas didn’t set out to hurt Zoe, he doesn’t mind doing it if it gets him what he wants.

However, it seems Thomas could have a slight change of heart soon. The Bold and the Beautiful spoilers say Thomas will propose to Zoe, which will naturally leave poor Douglas reeling. Other B&B news reveals that Douglas will turn to Hope for comfort. He’ll be totally freaking out, so that could be what causes Thomas to back off.

The Bold and the Beautiful spoilers say Thomas will ultimately make a difficult decision. There’ll be a major sacrifice, so he may back off this Zoe angle. Thomas might think it’s best that they part ways for Douglas’ sake. He may accept that co-parenting could be as good as it’ll get with Hope and just hope Douglas finally settles down.

Naturally, that’s just the kind of thing that could genuinely win Hope over! Once Hope got updates, she’d be glad to see Thomas putting his son first and doing something authentic for once. Thomas could be well on his way to a future with Hope, but will a potential bun in the oven derail it? Will Zoe admit she’s pregnant and completely throw off Thomas’ plans?

The Bold and the Beautiful spoilers say Thomas could end up with some big news and quite a mess on his hands. It sounds like some fantastic drama’s cooking up, so be sure to check back often for updates.