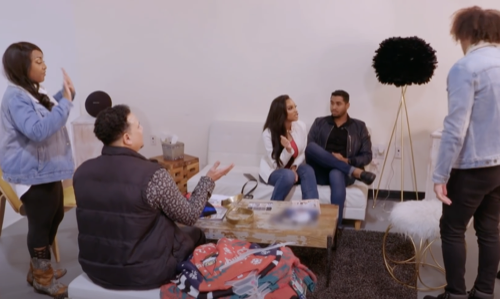 Tonight on TLC their reality show The Family Chantel premieres with an all-new Monday, October 26, 2020, episode and have your The Family Chantel recap below.  On tonight’s The Family Chantel season 2 episode 3 “Ugly Sweaters and Painted Beards,” as per the TLC synopsis, “The family photo shoot turns ugly, leaving Chantel and Winter at odds; Pedro and Chantel head to NYC to meet Nicole’s boyfriend, Alejandro, and they learn a shocking secret; and Karen accompanies Winter to a weight-loss consultation.”

The family photo-shoot took a turn. Chantel picked on her younger sister Winter for not wanting to wear an ugly Christmas sweater for the Ugly Sweater Family Portrait because she said she no longer celebrates Christmas and that was insane to Chantel. Chantel grew up knowing how important Christmas is to her mother. Her mother loves the Christmas season and Chantel thought Winter should suck it up. She also thought Winter was acting out right now because of Jah. Jah was technically Winter’s ex-boyfriend and she’s still talking to him because she can’t help herself. She wants to check in with him. She wants to know how he’s doing and it doesn’t matter that he treated her horribly.

Chantel said Jah’s behavior had changed Winter. Winter was lashing out more and she had overreacted tonight with Chantel. She called her sister a bitch. She stormed out with her brother River and she later came back after realizing she overreacted. Winter also knows why she did so. She overreacted because she was mad at her sister. Her sister took her out to a club and she didn’t want to go. She felt pressured into going just like she felt pressured to celebrate Christmas. Winter later told her sister that she didn’t want to go to the club. She hates it and she said she hates it so much because she feels like Chantel is trying to turn her into a cookie-cutter version of her. Only Winter didn’t want to be another Chantel.

Winter wanted to be Winter. She told her sister that she didn’t even properly support during her weight loss journey because she felt like Chantel wanted to turn Winter into another Chantel and so she forgets a few things. Chantel didn’t want her to get weight loss surgery. She tried to convince her sister that she is beautiful just the way she was and it was Winter who insisted. Winter also brought up the club thing while her older brother Royal was there with his wife Angenette. Angenette also went clubbing with Chantel and Winter. She left early when Royal showed up and he told her they were leaving and so of course Royal had something to add to Winter’s statements. He told Chantel that she wasn’t acting like a married woman at the club.

Royal said he collected his wife because Chantel’s behavior was out of control. She was twerking out in the open for everyone to see and Agenette said other men were looking at Chantel like they wanted to eat her or something. It was such a tattletale moment. Chantel got very upset and she wasn’t really upset with her brother. She was more upset with Agenette. She thought Agenette said what she said to tell on Chantel. This deepened her mistrust of Agenette because she already doesn’t trust Agenette married Royal out of love and she’s privately accused her of fishing for an American. Chantel now firmly doesn’t like her sister-in-law. She had to explain herself to her husband because at first he was upset about the dancing and truthfully that was fair play.

Chantel’s husband Pedro once got in trouble himself over some dancing. He was dancing upon another woman and at least Chantel wasn’t dancing on another man. She was simply twerking to herself. Chantel was fighting with both her sister and her brother because of what happened earlier. She couldn’t wait to get away and so Pedro’s trip came at the right time. Pedro was taking her to New York as a gift. It was supposed to be a part of her graduation gift and sadly Chantel wasn’t graduating just yet. She still has a semester to go. She also was still going to New York because technically the trip wasn’t about her. It was about Pedro and Pedro’s family. Pedro’s sister Nicole was dating a man from New York.

Pedro’s mother is concerned about this man. She doesn’t fully trust him and so she asked Pedro to go introduce himself to this man. His name was Alejandro. He calls himself Nicole’s boyfriend and he wishes to introduce her to his own family on the next trip. Nicole was supposed to fly to New York to be there when Pedro met Alejandro. She couldn’t make it and the trip happened anyway. Pedro took his wife to New York. He and Chantel went and they toured the city. They also finally caught up on sex. They were having a lot of missed opportunities back home and so the trip allowed them to relax and just let things happen naturally. They also went ice-skating. Pedro didn’t grow up skating because that wasn’t a thing in the DR and so tonight was a first for him.

Pedro used the children’s tool on the ice. It didn’t work out for him as well as it does on kids and so he fell a lot. His wife tried not to laugh in the beginning, but soon she couldn’t help herself. She was laughing and she had forgotten about the fight with her sister entirely. Winter was back home looking into getting weight loss surgery. She had to get herself weighed first and that led to her finding out she was over three hundred pounds. She is more than a hundred pounds overweight. She has to get her weight under control. Her doctor wants to see that first and while she was at it she needed to work on her communication skills. Winter’s mother went with her to the appointment. She also later told Winter that she needs to talk to Chantel.

The way things ended between them was rough. Chantel doesn’t know where she goes wrong with Winter and Winter believes her sister doesn’t really love her. The two of them needed to talk to clear some of these things up. Only the conversation isn’t going to happen anytime soon. Winter was feeling a certain way at home and Chantel was feeling another way in New York. The New York trip also had setbacks. Pedro’s meeting with Alejandro had gone horribly as well because Pedro was asking way too many questions. Pedro walked with a list of questions and one of them was about Alejandro’s immigration status. And he didn’t even get around to questions when he began calling Alejandro too calm.

Alejandro was confidant. He wasn’t sweating or tripping over himself with words. If anything that was Pedro. Pedro thought Alejandro was cocky. He also asked where he’s from and he found out Alejandro is from the Dominican Republic. He came to the US on a visa. He got married and that’s how he’s been able to stay in the States. This was also apparently too much for Pedro because he began hating Alejandro from right then.