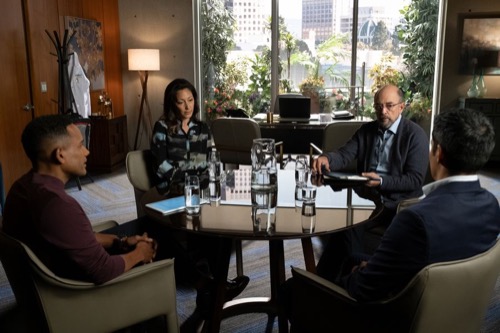 Tonight on NBC their new medical drama “The Good Doctor” airs with an all-new Monday, February 10, 2020, episode and we have your The Good Doctor recap below. On tonight’s The Good Doctor season 3 episode 14 called, “Influence” as per the ABC synopsis, “After Dr. Shaun Murphy treats a patient who is a social influencer, he deals with unwanted attention.

Meanwhile, the team treats a woman who is in abdominal distress after an at-home fecal transplant; and Dr. Carly Lever’s efforts to separate Shaun from Lea are challenged.”

Shaun wakes Carly up and says he wants sex. She tells him that it is too early. Shaun has been up since 4:53 am, and calculated that they have enough time for sex and to still get ready to be on work on time.

Shaun sees a patient named Kayley she has a sore throat and nobody can figure out what is wrong with her. Kayley tells Shaun that he is interesting, he tells her that he has autism. Kayley takes a picture of him.

Another patient comes in, she has severe abdominal pains, Alex attends to her. The results show her colon is distended – he asks the patient if there is any history of Crohn’s disease, she says no, the only thing she has had lately is a few UTI’s. They have to keep her on antibiotics, keep her in the hospital. The woman is a single mother and her family lives out of town, Claire offers to get a social worker to take of her child for her.

Shaun is consulting with Marcus and Morgan over his patent, Kayley. Marcus tells him to give her something for the pain and send her home.

Claire is with the little girl who tells her that she made her mommy sick because her mommy drank her poop.

Morgan and Shaun go to see Kayley and tells her that it would take 37 more tests to figure out what she has. Kayley gets upset, she has a stroke right in front of Shaun and Morgan.

Alex goes back to see the woman with abdominal pains, they are going to have to do surgery. In surgery, there are complications with a major bleed.

Shaun is thrilled, he saved Kayley. He and Carly are outside, some girls walk up to him and start taking pictures of him. Kayley is an influencer, those are her followers.

Shaun and Morgan go to see Karley, tell her that there are two ways they can do the operation, it is her choice. Shaun tells Kayley that she had no right to share him with the world.

Audrey tells Aaron that the posts about Shaun have gone viral and she thinks it will be good for the hospital. Aaron says that he will speak to Shaun.

The woman with the abdominal problems, Anne, is woken up by Alex and Neil. They tell her that her daughter has narrowing of the left artery to her heart, a genetic condition, and requires immediate surgery.

Aaron sits down with Shaun who tells him that he doesn’t want to be on social media. Aaron says he knows he has trouble with social interactions, Aaron tells him stories do matter because they can be inspirational to people. Shaun tells Aaron that he has no time between his job and sex. In the end, Shaun agrees to think about it if he will interview Lea for a tech job.

Shaun is in to see Kayley, she tells him that she is sorry that she upset him, and she is grateful, he saved her and her career.

Anne’s little girl comes into her room, she tells her that mommy was sick and had to be fixed, and now they need to fix her too. The little girl starts freaking out and shouting no, then she passes out and hits the floor, she has a heart attack.

Aaron interviews Lea, he admits he has no interest in hiring her, he was just doing a favor for Shaun. Lea proves to him her worth, Aaron has a change of heart.

The little girl is in surgery, they save her life.

Shaun is having lunch with Carly, and she finds out that he had lunch with Lea the day before and he is trying to get her a job. Carly is not happy about the situation.

Carl tells Shaun that she knows that it is not for her to ask him to cut Lea out of his life, but she was jealous, and this is something she has to work out. Shaun says they will work it out together.

Audrey goes to see Neil and tells him that they received an anonymous favoritism complaint against him regarding Claire and they need to deal with it.

Shaun goes to see Aaron and tells him that he doesn’t want to talk to reporters. He considered all the arguments, he just wants to be known as a good doctor, not a good autistic doctor.