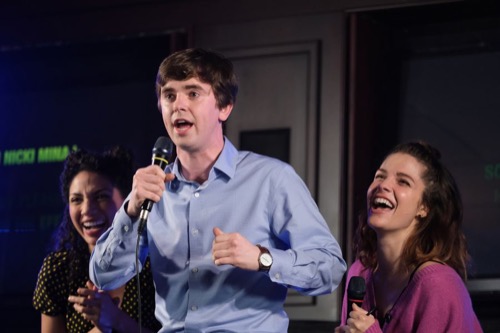 Tonight on NBC their new medical drama “The Good Doctor” airs with an all-new Monday, February 17, 2020, episode and we have your The Good Doctor recap below. On tonight’s The Good Doctor season 3 episode 15 called, “Unsaid” as per the ABC synopsis, “Despite everyone else’s doubts, Shaun is hopeful that Carly is truly fine with his friendship with Lea.

Meanwhile, the team treats a young boy—born without a fully formed trachea and unable to speak—who may be a good candidate for an experimental procedure.”

Shaun is very proud to have made breakfast for Carly, she says the meal is perfect. He says he wanted to show her love and comfort to help her get over her insecurity over his friendship with Lea.

At the hospital, Shaun sits down for a meeting, and he is late. He tells Alex, Claire, and Morgan, it’s not his fault, Carly wanted sex. Neil joins the meeting, he apologizes to them. Dr. Lim told him that she received a complaint, that he is playing favorites. And he sorry, he didn’t mean to show favorites, and he didn’t want any of them to think that.

There is a young male patient named Cory, his upper trachea never developed in the womb, his upper airway is totally blocked and he has no larynx at all. The tube he needs to breathe keeps causing infections and recurring pneumonia. Shaun sees the mother signing to her son to communicate, he asks why she is doing that, he is not deaf, she says it helps him to communicate. Audrey tells the parents that there is surgery, it won’t help Cory speak, but it will allow him to breathe on his own without the tube, his father is worried it is experimental, Cory wants to go ahead with it though, anything to get rid of the tube in his neck.

Neil is with another patient, Fran, she was attacked by a dog and almost bled to death. Claire and Alex are there as well. Alex tells her there is more surgery. She says that she is a firefighter and needs her full strength, Claire tells her with physical therapy she will get pretty close.

Morgan and Shaun are alone in a room doing a test on Cory, she tells him that if Carly ever says there is nothing wrong, then there is something wrong. Alex and Claire are together, she asks who does he think complained to Dr. Lim, he says he doesn’t know. Claire thinks it is Morgan, and how does she expect them to trust her. Alex gives up the truth, he complained to Dr. Lim, he doesn’t want to see her getting special treatment, and then there be a cloud over her.

Shaun is at lunch, Lea sits down with him, she says she will scram if Carly comes. Shaun says Carly is fine. Morgan walks up and tells Shaun that lunch is over.

Fran is in surgery, the dog actually has bite marks right to the bone. Claire wants to assist Neil, but he asks Alex too.

Cory is also in surgery, Claire is operating and having a hard time, Dr. Lin tells Shaun to take over. They start talking about Lea having lunch with Shaun, Claire says maybe Carly has reason to be jealous, Lea was eating off his plate and that is the oldest trick in the book.

Neil is outside the hospital with Carly, she tells him she will see him in the morning on the track. Neil says he cannot do that, he can’t socialize with residents outside of work anymore. Carly is flabbergasted, she says they are just friends. She says it is not fair, just because she is a woman, she can’t be friends with him, it’s not far. Neil says he agrees with her, but the rumors have started and he has no choice.

Cory is out of surgery, they are going to remove the tube. Dr. Lin removes it slowly, Cory signs to his parents that it hurts but it is the best feeling he has ever had.

Carly and Shaun are at dinner at home, he says it is delicious. Shaun discussed his patient Cory, he is frustrated that he cannot talk. And, if doesn’t learn how to speak soon, he will never be able to. Shaun leaves the table and says he has to do some reading.

Claire tries to do some practice sutures and her hands are shaking terribly, she takes some meds and tries again.

Shaun is at lunch with Lea, he tells her that she never used to eat off his plate. He tells her that Morgan said she is trying to assert dominance over Carly. Lea says it is not true. All of a sudden, Shaun comes up with something for Cory and leaves the table.

Fran finds out that they were able to reattach her bicep muscle and tendon, but she can’t move her arm.

Shaun speaks to Dr. Lin and Morgan, he has an idea on how they can help Cory. Dr. Lin likes it and they bring it to the parents. The parents are against it, they don’t want to take the risks. Shaun tells them that they are making a big mistake, then he leaves the room.

Lea is in the elevator, the doors open and Carly gets in. Its an awkward moment, then Lea asks her if she is ok that she is friends with Shaun. Carly says she is fine, Shaun always tells the truth and he said that he is not interested in her.

Cory is going to get discharged, Shaun asks him if he is happy to be going home, he nods yes. Claire asks him what’s wrong, he doesn’t seem that happy to go be going home. Cory tells them that Shaun was right, he doesn’t have a hard time at school making friends and doesn’t want people to think he is stupid anymore.

Cory is back in surgery, the doctors are trying to give him a voice. Cory’s blood pressure is plummeting. The team works hard to save Cory, he stabilizes.

Carly and Shaun are out having drinks, he is very excited about what the team did for Cory. They look around, a girl is making out with a guy and Shaun says they should get a room. All of sudden, the girl turns around and it is Lea. Carly asks Shaun if he would kiss in public, they try it. The four get up on stage and try their hand at karaoke. Shaun gets so excited, he grabs the mic and is so excited jumping around with Lea, Carly looks on and she doesn’t seem happy, she knows that Shaun still has a connection with Lea.

The next day, Shaun tells Carly that is happy that she and Lea are friends.

Fran has woken up from her second surgery, she definitely should get her strength back.

Cory is awake from surgery, they ask him to try and make a sound. Cory makes a sound and everyone is thrilled. Cory thanks Shaun for pushing for the surgery, it is the best day of his life.

Neil is out having a drink when Claire sits down beside him. She says they can be friends without it being weird. He tells her to enjoy her dinner, gets up and leaves her.

Morgan is getting changed in the locker room, Dr. Lin asks her what is going on. She says she thinks she filed the complaint against Neil because she doesn’t want to be fired and she is wondering why she would think she would be fired. Morgan doesn’t tell her.

Neil comes back into the restaurant and sits down beside Claire, he asks for two menus.

Carly sees Shaun coming out of the hospital, he says he is going to make her a special supper. Carly tells him that they shouldn’t be together anymore. Shaun asks if he did something wrong, she says no. Last night at karaoke, when he was singing with Lea, there is something between them too, she thinks he loves her. Shaun says no, he tells her that she is wrong. Carly says that maybe he believes that, but she saw what she saw. It’s true, he loves her and she loves him too. Carly tells him to go to Lea and tell her how he feels.