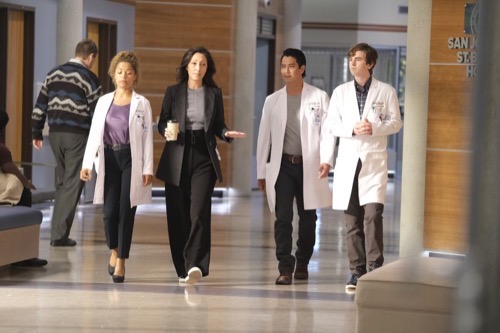 Tonight on NBC their new medical drama “The Good Doctor” airs with an all-new Monday, November 16, 2020, episode and we have your The Good Doctor recap below. On tonight’s The Good Doctor season 4 episode, 3 called, “Newbies” as per the ABC synopsis, “With several candidates vying for residency at St. Bonaventure, Chief of Surgery Dr. Audrey Lim tasks Dr. Shaun Murphy, Dr. Claire Browne and Dr. Alex Park with mentoring the top first-year resident contenders.

As their mentees shadow them for the day, Shaun and Park meet with Andrews to discuss a difficult surgery scheduled for a minor. Later, Shaun inadvertently insults Lea while discussing the pros and cons of the controversial surgery.”

Jordan Allen, her first year in med school she designed an ankle brace that monitored the extent of mobilization via a phone app. When she got it licensed she was able to pay off half her student loans. John Lundberg worked every summer since he was sixteen at camp Hope Heartland for kids with cancer in Demoyne. Asher Wolk, when he was eighteen he left the Hasidic community where he raised, he realized that if there was a God it had to be a cruel being that he has contempt for; that is also when he decided to go to med school and start dating men.

Olivia Jackson, she is 25 and plays ragtime piano alone in her apartment, is that interesting? Will Guber, technically he is a professional athlete, he is on the rowing team. Enrique, spent last summer in Costa Rica where he learned to surf. These are all people who Alex, Claire, and Shaun are interviewing.

Audrey tells Alex, Claire, and Shaun that the interview applicants will be shadowing and they will pick four to become new residents in the hospital.

Aaron is finally back in his office, Morgan stops by to speak to him. She says internal medicine is boring. Aaron tells her it can be rewarding, given time, and if she is patient. He tells her that some of the nurses have complained about her and it cannot happen again.

Morgan is taking an ultrasound on a patient’s heart, she tells him he has a large tumor on the wall of his heart and will need surgery as soon as possible.

Marcus thanks a patient for sharing her case with the class. A 17-year-old is getting breast surgery because of a deformity. Jordan tells her she is beautiful anyway and she shouldn’t get the surgery.

Next, the class is in front of Morgan and Claire while they discuss the case of the patient who needs heart surgery.

Morgan and Claire speak to Morgan’s patient, he just wants to go ahead with surgery, he doesn’t want to call his family.

Shaun and Lea are having lunch, the class is looking on and Lea finds it uncomfortable. He introduces them all to Lea. Shaun talks about how Jordan told the patient she should get the implants.

Morgan’s patient is in surgery, she is watching from above with the class. Audrey and Clare are performing the surgery and talk about the applicants. Something goes wrong in the surgery, Audrey tells Morgan that they can’t access the tumor without compromising his cardiac system, the tumor is too far back, they are going to close him up.

The girl is in breast surgery, she goes into cardiac arrest but they save her, she is transferred to the ICU. Afterward, the team discusses the case with the class.

Alex calls everyone to the break room. Alex tells them that when he was young he thought it would be fun to spar with a pro-boxer who visited his dad’s gym and that was Mike Tyson. Morgan says she has gone to the musical Wicked over fifty times, Alex calls her a nerd. Claire says she loves music, hates musicals, and doesn’t really like to talk about herself. Shaun says he used to not like music, but Lea changed his mind. He likes watching the weather channel and thinks pickles are disgusting.

Audrey and Marcus sit down and have a drunk together.

Shaun asks Asher why he hates God, he says he doesn’t hate him, he doesn’t believe in him. The class is not crazy about the personal talk, Shaun reminds them that they are supposed to get to know each other.

Morgan and Claire get into an argument about her patient, Claire tells her that she is not a surgeon and needs to butt out.

Shaun is home, Lea tells him that she is upset and confused and should just leave her alone, she goes home. She isn’t happy about what he said in front of the class, about her voice being annoying when she speaks to her mother. Shaun goes to Aaron about his woman problems, he tells him he has a thought. Shaun sees Lea in the hallway, he tells her that he is sorry. He says he wants to be totally honest, he doesn’t like her body because it is excellent, he loves it because it is hers. And, he finds her voice comforting when he has a hard day, he hugs her and tells her that he loves her. She thanks him for total honesty.

The patient with breast surgery, the cardiac arrest was caused by a clot in her brain; one of the med students finds it. In surgery, all goes well. The girl wakes up from surgery, Marcus tells her that there was a complication during surgery, but she will be fine.

In the OR, Morgan is told to leave because she is interrupting Audrey while she tries to operate on her patient. The bleeding is getting worse and he is tanking. More work on him and blood, they get a rhythm. Morgan’s patient wakes up, she tells him that he is going to be fine, thanks to his surgeon Claire.

Alex tells Claire that Will is in, so there are three places. Shaun is there, they decide on Jordan, Asher, and John. Later, they meet with Audrey and she tells them that John is out, he backed down because he thought the staff there were unprofessional; drinking at work, asking inappropriate questions, and dating drama. Claire tells Audrey that Will is the worst, he is arrogant and he won’t work well with them. So, it is Jordan, Asher, Olivia, and Enrique. They helped pick them and now they have to train them.