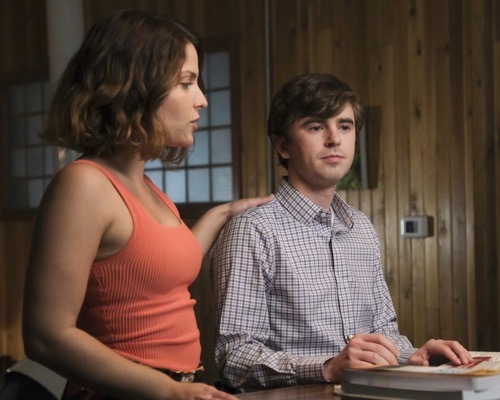 Tonight on NBC their new medical drama “The Good Doctor” airs with an all-new Monday, November 30, 2020, episode and we have your The Good Doctor recap below. On tonight’s The Good Doctor season 4 episode, 5 called, “Fault” as per the ABC synopsis, “Dr. Shaun Murphy questions his decision to give the new residents autonomy when one of his intern’s misdiagnosis of a patient has dire consequences.

Ellie is with her boyfriend, Zane, they come into the emergency for headaches, Jordan asks how often she gets the symptoms. Her foot shakes and she doesn’t feel it, it’s not a migraine.

Morgan finds a parrot statue that Alex brought into the apartment with him when he moved in, she gives it back to him and tells him it is fun to get to know him.
Asher is examining a man who is 58 years-old with back pain, he orders a series of tests. The patient recognizes that he is new and Asher admits that he is his first patient, Asher apologizes.

Olivia is examining a woman who has high blood pressure. Shaun is watching and Audrey tells him that he has to trust them.  Jordan has her patient getting an MRI and she has a seizure on the table.

Shaun learns how high Olivia’s patients’ blood pressure is and hurries to her room with Olivia and Asher following him. He tells the patient to lift her arms, she is having a stroke in front of them.

Ellie’s seizure and coma was caused by a dermoid cist, she likely got it before she was born. Surgery can cause stroke or paralysis, they need an answer right away, they can’t find her sister. Zane tells them that he may still be on a business trip, but they can try her husband.

Ellie’s husband, Brandon, arrives at the hospital and is told that if they can’t reduce the swelling in her brain, she will have permanent brain damage. He says he is not sure if he is the right one to make that decision, right now he hates her. Alex tells him that he is hurt because he loves her.

Ellie is in surgery, she does well. Meanwhile, Asher’s patient starts having severe abdominal pain.

Ellie is awake, Brandon tells her that she never said anything was wrong. She says she didn’t think anything was wrong, when she met Zane she realized that something was missing. He asks why she couldn’t just talk to him or leave him. She doesn’t know. He asks if she is happy, she doesn’t answer, but she asks him who the people are around her, she is confused and doesn’t know she is in a hospital.

Asher’s patient had an aneurism as he was being discharged, he is in surgery. Shaun says Asher missed it but Audrey says they are hard to detect. Shaun goes on about Asher making a mistake and Audrey tells him to stop.

An MRI is being run on Ellie, she is getting temporary memory loss. Brendon says he cannot imagine being without her, meanwhile, Zane is saying the same thing.

Shaun is at home, Lea tells him that she wants them to have a date night, to have fun, he schedules it for tomorrow.

Claire and Alex tell Ellie that she needs surgery or the memory loss could be worse.

Asher is examining his patient after surgery, he has signs of jaundice, his liver could be failing. Shaun is with Asher and Audrey, a new aneurism is making the liver fail, he will die without intervention, Shaun says he will die either way. Audrey tells them to research alternate solutions or they will proceed with a bypass.

Claire tells Brandon that she thinks Zane should speak to Ellie to convince her to have surgery.

Ellie is being prepped for surgery. Meanwhile, Shaun, Asher, and Jordan are trying to come up with an alternate solution to save Asher’s patient.

Alex is at home, he opens Morgan’s curtain, shows the things she has seen around the apartment, tells her that she hasn’t moved on from past relationships, but she has an excuse for everything. She tells him that she is naked under her covers and has to go to the bathroom, he leaves the room.

Asher tells his patient about the solution to save him, he asks how bad this is. Asher tells him it is bad, he thanks him and tells him that no matter what happens he is going to be an incredible doctor and he is honored to be his first patient. Asher tells him the truth, he should have felt his aneurism in the first appointment. He tells Asher that he needs him to pray for him, he must know a prayer for the sick.

Ellie is awake from surgery, she recognizes Brandon, but not Zane, he leaves the room. Brandon tells her a lot has happened in the last week, and he has a video message from her old self to her new one. He tells her that he loves her.

Asher’s patient is in surgery, he goes into distress. They do everything they can, but he is dead. Asher is in the surgical room and he was the one trying to revive his patient by doing chest compressions.

Ellie is with Brandon, she tells him that she doesn’t remember anything with Zane but the feelings were real. But, all it made her think about was him. She asks him to forgive him, she loves him and wants to go home. He takes her hand, they both hold each other’s hands. Zane is outside, he sees the two, he leaves.

Shaun goes to see Aaron and tells him that the patient died. He tried stepping back, brainstorming, and he died. Shaun blames himself. Aaron tells him there are days when he is going to fail like everyone else. You go home and be with the people you love and take comfort in that, you wake up tomorrow and start all over again. Shaun has tears in his eyes. Shaun leaves Aaron and finds Asher outside sitting in a chair, he tells him that he can go home, but Asher doesn’t want to be alone right now. Shaun sits beside him.

Alex and Morgan are outside in front of a burning fire in a barrel, he throws the parrot inside.

Shaun goes home, Lea is in bed, he climbs in beside her and holds her hand. He tells her that he is glad that she is there with him.