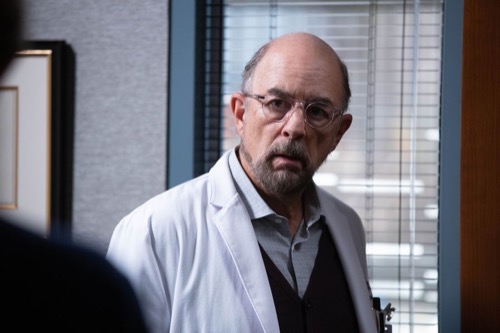 Tonight on NBC their new medical drama “The Good Doctor” airs with an all-new Monday, January 20, 2020, episode and we have your The Good Doctor recap below. On tonight’s The Good Doctor season 3 episode 11 called, “Fractured” as per the ABC synopsis, “Shaun opens up with Aaron about his feelings towards Lea.”

Shaun is awake sitting on the edge of the bed, Lea is lying down. He tells her they should leave for the airport, but she thinks it is too soon. Then she tells him that she doesn’t think he should mention anything to anyone about last night, he says ok.

Aaron is putting gas in the car, Shaun tells him they slept together, he asked if he used protection. Aaron says no, they didn’t have sex, she just comforted him and it felt different than with Carly. Aaron says sex or no sex the wheels are in motion and someone is about to get run over.

At the hospital, Morgan gives Shaun her condolences. A patient comes in, she fell down a rocky slide, Shaun calls for an X-ray and an MRI; she doesn’t want any pain meds, they don’t agree with her.

Alex is examining a patient who is bloated, he recommends he be admitted, it could be fatal if left untreated, but the patient has no insurance and only wants laxatives. Claire is there, she agrees to give him the meds, but wants the patient to agree to stay until he has a bowel movement, to give them peace of mind – he agrees.

Shaun goes to drop off a sample to Carly, she asks why he didn’t return her calls or texts. She goes on to say it was hurtful, Shaun doesn’t know what to say and asks her to take the samples for the patients, she does, but she is not happy.

Claire tells Neil that she has started seeing a therapist, he is happy for her and hopes she finds it helpful. She says her doctor thinks she may have PTSD.

Alex’s patient, Luca, is still bloated and tries to leave. Claire catches him and asks him to stay so they can help him.

Morgan has a chat with Shaun and tells him that Lea is flaky, Shaun doesn’t agree. Shaun then goes to see his patient who hurt her leg and tells her that she needs surgery. She tells Shaun the truth, she doesn’t get sick from narcotics, she is an Opioid addict who has been clean for eight years, that is why she doesn’t want pain meds. Shaun comes up with a plan to use pins and do the surgery a different way to reduce the pain. Meanwhile, Claire is worried that the cops will be called on Luca because they suspect he has a bag of heroin in his stomach. Neil is sympathetic to how Claire feels, but it is hospital policy.

Claire goes to see Luca, he tells him that if he leaves the hospital he will die. Alex tells Luca the brutal truth of what will happen to him if that bag busts. Claire asks Luca to give her a little more time to let her help him stay out of jail and get better. Claire talks to Neil and he thinks there may just be a way to help Luca.

Claire is going to help Luca, they are going to remove the bag and once he is discharged, then they will call the police.

Shaun measures the pros and cons of Leah and Carly. Shaun asks Marcus how he knew his wife was the one. He says his heart sped up every time he saw her. Shaun gets a call from the hospital, his patient leg is swelled up, she is feverish; he needs to head back there.

Marcus is with Shaun, he tells the patient they have to do something different narcotics, she says no. Morgan tells her that drug addiction is a disease, it is not her fault. They can’t change her mind, Marcus goes to speak to the husband. Marcus tells him that there have been complications but he cannot go into detail because of confidentiality. He goes to see his wife, she tells him that truth, that she was an addict and that is why she never wanted to take pain killers.

Shaun meets with Carly over lunch, he tells her that he likes her laugh, her smile, her breasts, he likes spending time with her, he likes that she is his girlfriend. Carly tells him that she is worried, he doesn’t have to impress her, she just wants him to talk to her. Shaun says she is right, he has to tell her everything. He got very upset in Wyoming, Leah came in to comfort him and they hugged and played down on the bed, fell asleep hugging, that is all that happened. Carly says they struggled to lie together for weeks and he did in it one night with Leah. Carly says she needs some space and can’t be around him right now.

Claire goes to see Luca who is out of surgery, he is smiling and thanks to her. Meanwhile, Shaun’s patient is in surgery, still no pain meds and screaming in the operating room. Shaun lets her squeeze his hand so they don’t have to give her pain meds.

Claire goes to see her therapist and tells her how she thinks she made an impact on the woman’s life who used to be a drug addict.

Neil and Alex tell Claire that Luca’s samples were stolen from the hospital, and he is gone.

Claire tells Neil that she always thought she would end up like her mother, being taken advantage of. Neil tells her that she is a good person, but every now and then she is going to feel like an idiot, today she was wrong, but he still loves working with her.

Shaun sees Carly sitting on a bench outside and asks her if she has had enough space yet, she asks him to sit down with her. She asks him if he remembers the first time they met, he does. She tells him that he is the most genuine person she has ever known, she likes him because he told her the truth and doesn’t to lose what they have. He hurt her, and she worries it can happen again, but she wants to be with him. She just doesn’t know how this works if he lives with Leah. She tells him to take some time to think about it. She gets up to leave, he grabs her hand, tells her ok, he wants to be with her, he loves her. They hug.