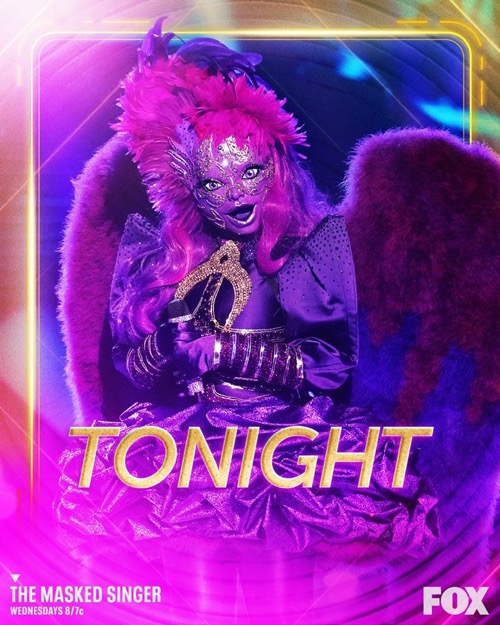 Tonight on FOX The Masked Singer airs with an all-new Wednesday, March 11, 2019, Season 3 Episode 7 and we have your The Masked Singer recap below. On tonight’s The Masked Singer season, 3 episodes 7 called “Last But Not Least: Group C Kickoff!,” as per the FOX synopsis, “Six all-new celebrities are introduced and take the stage for their first performances of the season.

Host Nick Cannon and panelists Ken Jeong, Jenny McCarthy, Nicole Scherzinger and Robin Thicke dive into the clues and make their guesses for the celebrity singers performing under their masks.”

New night and a new set of six celebrities. Three that will be unmasked over the next few weeks. As always we have Nick as our adorable host and judges Robin, Jenny, Ken, and Nicole.

Night Angel is the first up tonight. Her clue package is a motel. She says like an angel she has been blessed her entire life and that doors always opened for her. The doors respectively are numbers 4,5,6. Behind door 4 are some guys wearing duckbills. She says while fame has sometimes brought her down like a landslide she has always found the light. Behind 5 we have what Robin refers to as “Gangster grandmas”. She says her positivity is her best magic trick and the key to her success. Behind door 6 are a bunch of guys partying. She ends the clue package by saying “That boy is mine” and that it’s “My Prerogative” to have fun. Night Angel’s song of choice tonight is “You Give Love a Bad Name” by Bon Jovi. Robin guesses Taylor Dwayne. Jenny picks Monica. Nicole picks Lil’ Kim. My guess is Monica as well.

Next up is the Bear. She says in her life she has both been the hunter and the hunted. There is a radio in the background that says she is positively unbearable (hahaha). She says after years of all the phony-baloney she wants everyone to know who she really is. Hockey Skates are in the background. She says this mama bear is coming out of hibernation. She says she has been a little polarizing but it’s to protect her cubs. Lots of French fries in the package. Bear’s song of choice is “Baby Got Back” by Sir-Mix-A-Lot. (Going to call it right now guys … it’s Sarah Palin). Ken thinks it’s Tonya Harding. Jenny thinks Candace Cameron -Bure. Robin thinks it’s Tina Fey ( so so so close.) Ken changes his guess to Britney Spears. My Guess is obviously Sarah Palin.

Astronaut makes his crash landing. He says he has always believed in flying high because if you want something enough not even gravity can hold you back. He talks about his home planet (a lei is floating behind him, there is also a broom). He says endless possibilities get his heart throbbing. He crashes lands and says it wasn’t a “Pitch Perfect” landing but he is there. Astronaut sings “You Say” by Lauren Daigle. Ken thinks it’s Josh Hutcherson. Jenny thinks it’s Lance Bass. Nicole thinks it’s Zac Efron. My guess is going to be Adam DeVine or Zac Efron.

T-Rex is next. She is sitting on a baby doll. She says like a dinosaur she was discovered and plucked from obscurity and launched into an extraordinary place called T-Rex island. She says she was plucked and taken to a magical world.( there is a paper with N S E W on it the N and W are Circled) she said she was one of the dozens of creatures pirouetting the land. She said it was a sisterhood of fun and friends. (There is a gold U with stars on it ). She says a cataclysmic event that changes her life forever. T-Rex sings “So What” by Pink. Ken thinks it’s Kourtney Kardashian. Jenny thinks it’s Maddie Ziegler. Nicole thinks it’s Rebecca Black. My guess?

Rhino is next and his clue package talks about him having a tough exterior when he is really just a gentle giant. He said when he was young he was the center of attention and when he wasn’t the best anymore he crashed and burned. His clue package includes a guitar, a red bicycle, and faith and butterflies. Rhino sings “Have a Little Faith In Me” by John Hiatt. Jenny picks Jason Aldean. Ken picks Tim Tebow. Nicole picks Tim McGraw. My guess Tim Tebow.

Swan is the last one tonight. In her clue package, she says she refuses to be tuned out. She has played games, lived fame, and seen shame and she claims on this stage where she came you won’t know her name. (She loves to talk in rhyme.) There are Vampire fangs, ghosts.) She is someone and no one. I’m rerun and no fun. She is bearing her soul to us. Swan sings “Fever” by Peggy Lee. Ken picks Nina Dobrev. Nicole picks Jennifer Love Hewitt. Robin thinks Sara Michelle Gellar. My guess Jennifer Love Hewitt.