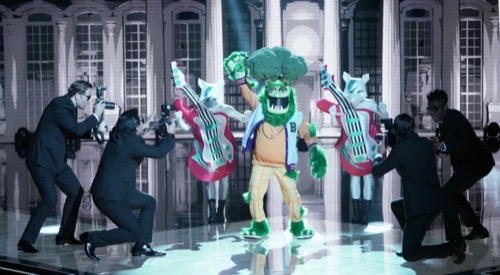 Tonight on FOX The Masked Singer airs with an all-new Wednesday, October 28, 2020, Season 4 Episode 6 and we have your The Masked Singer recap below. On tonight’s The Masked Singer season, 4 episodes 6 called “The Group C Premiere – Masked But Not Least,” as per the FOX synopsis, “The final group of celebrity contestants take the stage for their first performances of Season Four.

Play alongside host Nick Cannon and panelists Ken Jeong, Jenny McCarthy, Nicole Scherzinger and Robin Thicke as this masked bunch of celebrity singers wearing all-new custom-made costumes perform as America tries to guess who they are.”

It is the group C premiere. The Squiggly Monster takes the stage after the panel says hello. The monster reveals a few clues; they are a worry wort, no dumbo, and easy on the eyes to the ladies.

The Squiggly Monster begins his performance. Jenny and Nicole are sure they have heard his voice before. The panel drops their first guesses in the slot of who they think it is. The Squiggly Monster is all about spreading peace and love. Jenny thinks it might be Al Franken, while Ken thinks maybe Dr. Fauci. Nicole just knows she loves him.

Mushroom comes out on stage. The Mushroom blows them all away. Nicole has goosebumps. Now she thinks the mysterious singer could be a man. They all write down their guesses. The Mushroom gives a few more clues that confuse them more. Nicole wonders Hamilton or maybe even Donald Glover. Ken thinks Usher. Jenny thanks Frank Ocean.

The Jellyfish is up next. The Jellyfish shares that they used to reign supreme but then left and returned to the real world. It has been an exciting journey. She sings a Fergie song. They love it. The panel guesses maybe Gabby Douglas, Sophia Ritchie, or maybe an actress from Crazy Rich Asians, Ken shares.

The Broccoli is now up. The singer reveals it is humbling to work with the OGs. He has big shoes to fill but he is ready. It is time for the first impressions guesses. Broccoli reveals that they work out and they are into eating healthy. Nicole thinks the singer could be Bill Murray. Jenny thinks of Howie Mandel. Robin thinks of one of the actors from Three Men and a Baby, the movie.

Lips hits the stage. Nick shares some clues. She loves to speak truths. Her fans are going to be shocked to see her on this stage. She dedicates her song to New York. Robin thinks she might be Sandra Bernhardt. The panel thinks this is a great guess. Jenny thinks maybe Wendy Williams. Nicole agrees. Ken thinks Allison Janney. They all agree the performance was amazing.

It is time to vote for your favorite. The votes are in. The singer with the least amount of votes is…..Lips!

It is sad to see Lips go but they are all excited to see who it is. Looking back at the panel’s first guesses, Ken thought of Mariah Carey. They all laugh. Now he thinks Allison Janney. Robin is sticking with his guess of Sandra Bernhardt. Jenny thought Wendy Williams and still thinks it is her. Nicole agrees once again. Lips reveals herself. It is Wendy Williams!!

Wendy came on to have fun. She spoke with Nick days ago and never slipped to him that she was on his show. Wendy asks Nick when he and Mariah are getting back together. They all laugh. Wendy performs one more time.