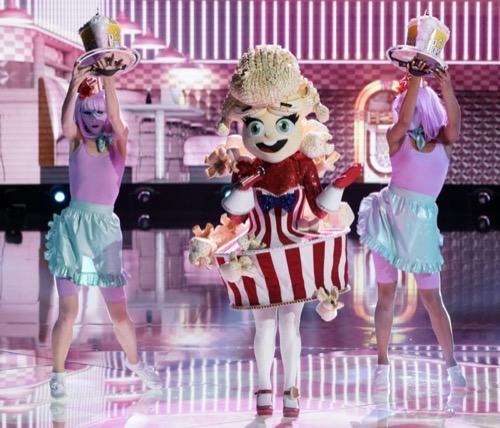 Tonight on FOX The Masked Singer airs with an all-new Wednesday, November 11, 2020, Season 4 Episode 8 and we have your The Masked Singer recap below. On tonight’s The Masked Singer season, 4 episodes 8 called “The Group A Finals – The Masked Frontier,” as per the FOX synopsis, “The final three singers from “Group A” take the stage for their final chance at the Super Six. The bottom two singers will face one another in a Smackdown and only two will advance to the Super Six.

Group A is back to battle it out in the Finals portion. The Sun, the Snow Owls, and Popcorn will sing it out tonight. Niecy Nash is tonight’s guest panelist. Before the competition begins, all three set to compete perform together, singing a Pink song.

Tonight, some of the families of the masked singers will share clues. The Sun’s family member reveals they have been traveling in their RV. The Sun hasn’t taken off this much time. He is glad she is performing again.

The Sun performs a Janis Joplin song. After, another clue is divulged. The Sun is a certified gold singer. Ken thinks this has to be Katherine McPhee while Niecy thinks it could be JoJo or Jewel. Jenny thinks possibly Demi Lovato.

The Snow Owls are up. A few clues are disclosed about them. The masked male has finally settled down thanks to the lady owl, who also believes in herself more because of him. They take the stage to sing.

More clues are shared. The Snow Owls are a romantic couple. Niecy thinks of Brad Paisley and his wife while Robin thinks of Amy Grant and her hubby. Ken guesses Danny Devito and his wife. They all laugh.

It is time for Popcorn to perform who has a crush on Nick. She drops a few clues about herself before taking the stage to sing a Jessie J song. The biggest clues are that she has been on the show before. The panel guesses possibly Cindy Lauper, Taylor Dayne or Anita Baker.

It is time to vote. After just a few seconds, The Sun moves forward with the smackdown between the Snow Owls and the Popcorn.

The Snow Owls sing first with Popcorn performing second. The crowd goes wild. The panelists are all torn. They are all great. It is time for the panel to vote and decide who won the smackdown.

With only one singer advancing, Popcorn is the chosen singer. The Snow Owls will not be moving forward. It is time to reveal who they are. Before that Nick and the panel looks back at their original guesses. Robin thought of Vince Gil and Amy Grant. He is sticking with that. Jenny has changed her decision to Amy and Vince. Ken thought it was Derek Hough and his sister but now he thinks it is the DeVito’s. Nicole thought of Donnie and Marie. Now she thinks of Clint Black and his wife Lisa while Niecy thinks of Harry Hamlin and Lisa Rinna.

It is time to take it off. The couple is… Clint Black and his wife Lisa. Nicole was right!