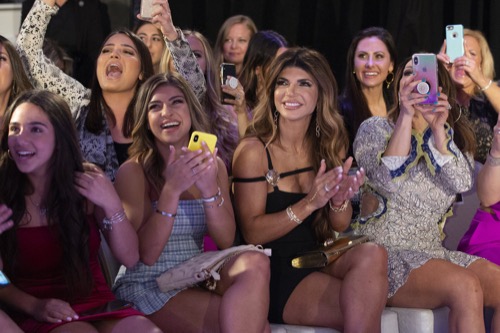 On Bravo TV tonight The Real Housewives Of New Jersey (RHONJ) airs with an all-new Wednesday, January 22, 2020, episode, and we have your RHONJ recap down below!  On tonight’s RHONJ Season 10 episode 11 called, “Clearing The Heir,” as per the Bravo synopsis, “Teresa and Joe fight to keep their family intact as they embark on a very public legal battle for their freedom. Meanwhile, Teresa’s oldest friend and veteran Housewife, Dina, returns to help her soul-sister.”

Tonight’s episode is going to be filled with more crazy housewife drama that you won’t want to miss, so be sure to tune in for our coverage of the show tonight at 8 PM – 9 PM ET! While you wait for our The Real Housewives of New Jersey recap head over, and check out all our news, spoilers and more about the RHONJ!

As soon as the ladies arrive in the Hamptons, Teresa knocks on Margaret for not officially inviting her. Melissa thinks it is time for wine. Margaret vents to the others while Jackie shows Teresa the house. Margaret is angry about the whole Danielle thing.

Margaret and Teresa decide to talk while all of the ladies drink wine and listen. Margaret was hurt when Teresa walked away, chasing Danielle. Teresa tells them how Danielle texted her every day after she got out of jail. She doesn’t want to be forced to pick sides. Margaret just doesn’t understand why Teresa didn’t tell Danielle to never put her hands on Margaret again. Teresa gets up and goes to one of the bedrooms, she can’t take this anymore.

They all decide a break is needed and everyone will unpack.

Dolores calls Little Frankie to check-in while Jennifer unpacks all of her Chanel. They all meet in the kitchen for shots of Patron. Margaret and Teresa play nice. They head out for the night in two cars. Margaret and Teresa are traveling separately. Teresa talks about how she doesn’t know what will happen to their friendship.

The ladies arrive at a nice restaurant. They order drinks and then dinner when Joe calls. He wants to know if he can talk to Dolores. She puts him on speaker. Joe tells Dolores maybe her man has a doctor friend that will marry Teresa. Dolores tells him she doesn’t want to talk. They hang up. Teresa tells them Joe and she isn’t doing well and hasn’t been. There is a lot of stress between them with their situation. Joe says he will always take care of her but she isn’t sure because they haven’t been together for a while. This gets the ladies talking about prenups and money. Jennifer starts to drill Jackie on her properties and how she had Evan sign a prenup. Some of the ladies think Jennifer is getting too personal.

The ladies all head down to breakfast. Melissa has been cooking. Jennifer has been taking videos of Jackie’s house to show her husband. They all eat, except for Jackie who eats quinoa puffs.

They are getting ready to head out to shop. Before Teresa comes down they all talk about how Teresa obviously is not doing well with Joe. They get into how he has always talked to her badly and it was acceptable. Now they can’t see him talking to her that way.

The ladies arrive downtown. Melissa and Dolores talk with Jackie about how Jennifer is new money and is generous. Meanwhile, Jennifer and Margaret talk about Jackie and has Jennifer think she is stingy after learning about how she is loaded.

At lunch, Margaret tells Jackie that Jennifer called her stingy because she served pizza at her kid’s party. When Jennifer comes back from the bathroom they start to fight. Jennifer tells her to pull the stick out of her backside. Jen brings up how Margaret made jokes about how Jackie doesn’t eat. Margaret apologizes right away. Jackie continues to give Jen an attitude. They all start to fight. Jen and Melissa start to stand up to fight. Melissa tells her to walk away.