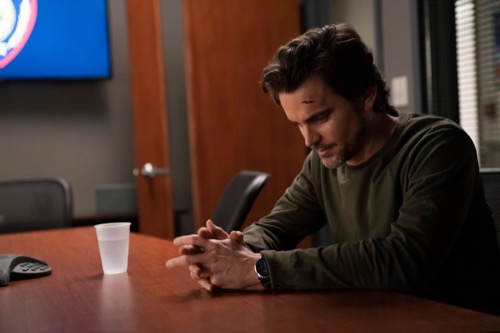 Tonight on the USA Network their new drama The Sinner premieres with an all-new Thursday, February 6, 2020, premiere and we have your The Sinner recap below. On tonight’s The Sinner season 3 episode 1 “Part 1” as per the USA Network synopsis, “Detective Ambrose investigates a tragic yet suspicious car accident on the outskirts of Dorchester.”

Detective Lt. Harry Ambrose is getting old. Most cops were considering retirement at his age and so there were a few that thought Ambrose should retire as well. His boss even brought up to Harry. He mentioned how he could be golfing right now if he just retired and the boss also said he put in his own papers. He wanted to leave the job to the younger crew. He suggested that Ambrose do the same and Ambrose didn’t want to go there. He likes his job. He wants to continue working and he was telling everyone that he was happy with his life.

Ambrose had to tell his daughter he was fine. She came out to visit him with her son and it turns out she was worried. She didn’t like that her father lived so far away from civilization. She reminded him that he didn’t get much cell reception out there and he told her that he gets two bars when he stands by a certain tree. Ambrose more wanted to talk about his grandson. The little boy was having behavioral issues and he didn’t have any friends. His therapist said he was still traumatized by his parents’ divorce.

Ambrose told his daughter he would help. He had made the offer and so naturally that’s when he gets a call from work. Ambrose was called about an accident on Route 9. He apologized to his daughter and he went to the scene of the crime. He saw that the driver of the car had lost control. He was driving too fast down a relatively abandoned road that was also on private property and the driver wasn’t wearing a seatbelt. He was thrown from the vehicle upon impact. He was identified as Nick Haas. He died and his passenger survived.

His passenger, Jamie Burns, was the only one that could say what happened out there. Ambrose spoke with him later on and Jamie was clearly still in shock. He said his old friend Nick had stopped by his house. They were catching up and so they went to a bar afterward. Jamie said he was the only drinking. He was very clear about that even if didn’t explain why Nick was speeding. He was reportedly doing 80mph for no reason and they were miles away from anyone. Ambrose wanted to know.

He asked Jamie where they were going. Jamie claimed that they had gotten lost on their way to a popular destination spot and he said cell reception was spotty. It surprisingly worked just fine when he called 911. Jamie also said that they didn’t know they were at a private party and that’s odd because they were heading directly to a woman’s home. Ambrose also took the time to speak to the owner of the private party. She was apparently a painter and she lived out there alone. She didn’t recognize photos of the men. And she was reassured when she learned they weren’t armed.

Ambrose continued on with the case. He found some discrepancies because the autopsy of Nick showed that the man would have survived if the medics had been faster and there was also evidence of him moving around after the accident. This goes against what Jamie told him. Jamie said that Nick didn’t move once. He had lied about that and his behavior that night was also odd. They found evidence that showed Jamie turned off the radio after the accident. It was such a weird quirk for someone to do after an accident.

Ambrose had a few more questions for Jamie. He went over to the Burns residence and he didn’t find Jamie. He did find the man’s wife. She was pregnant and alone. She was also a great source of information. Ambrose asked her about Nick. She said she just met him the night he died and she also said he wasn’t close to her husband. Jamie has never mentioned Nick to her before they met. Nick had told them he was in town for work and that he was there only for a night. Leela Burns had nothing else to add and so Ambrose tried to work what she gave him.

Ambrose knew that Nick lied. He had been in town for a week and he was staying in a hotel. Ambrose later checked Nick’s hotel room. He found nothing that showed why Nick had come to town or why he stayed so long. It couldn’t have been work. Nick was a wealthy man. He owned several companies and he would have no need of even looking at Dorchester. Nick must have come to town to see Jamie and Ambrose wanted to know why. The two men haven’t been in each other lives for a while.

They were no reason why either would suddenly want a reunion. Ambrose also put several theories together and he offered it to his boss. He told his friend and boss that Jamie killed Nick. Nick’s cell phone pinged in the area at around three am. The 911 call didn’t come in until an hour later. Jamie had waited to call for help and by doing that he ensured Nick died. Ambrose wanted to charge Jamie. His boss thought differently. He said Jamie could have passed out or he could have been in shock. There were plenty of reasons why Jamie didn’t call for help right away.

Ambrose told his partner his theories. He also questioned why Nick’s phone was found so far away and why he was wiped clean. There were no fingerprints on it. It was like someone had used Nick’s phone to hide something and then cleaned it to erase the fact it was ever used. Ambrose believed it was Jamie. He suspected Jamie was hiding something about the accident and he was onto something here.

Jamie was hiding the part of how he caused the accident. He pulled the brake and that’s why the car lost control. The car rolled several times. It eventually pinned to a tree and so that’s when Jamie work up. He woke up to find Nick dying. He then made the choice not to call for help because he wanted Nick to die. He waited to call 911. He was therefore responsible for what happened to Nick and they were on the road, heading to that house for some nefarious reason.