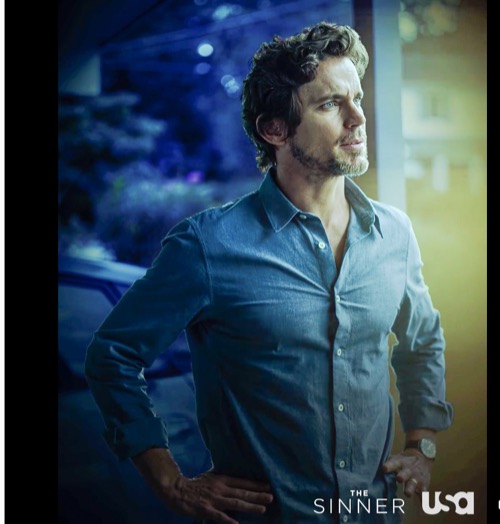 Tonight on the USA Network their new drama The Sinner premieres with an all-new Thursday, February 20, 2020, premiere and we have your The Sinner recap below. On tonight’s The Sinner season 3 episode 3 “Part 3” as per the USA Network synopsis, “Ambrose investigates Jamie’s past; Leela gives birth as Jamie’s anxiety reaches a breaking point.”

Jamie is in the kitchen, cooking, thinking as he has flashbacks. Leela comes in. She senses he is having another moment. He tells her he is sorry he is so hard to be around right now. She wonders if this is about the baby. He starts to carry on about bringing a baby into this world and then they die.

Ambrose stops by to see Sonya. She is nervous about Jamie but she can’t leave her home. It is where her work is, her life. Ambrose returns to work. His co-worker tells him about hairs and fibers found at the scene.

Ambrose goes to visit a former college roommate of Jamie’s while Jamie tells his students they need to talk. He tells her to meet him off campus later. Meanwhile, the roommate tells Ambrose how he awoke to Jamie covered in dirt and blood. Later, he attacked him. That is why he decided to move rooms.

Jamie meets with his student and talks to her about her Adderall use. That is not the most important thing however, it’s about her going to an Ivy League school. She is killing herself to make good grades and all for what? She doesn’t have to do what people tell her or do what others are doing. He starts to get upset. Realizing this, he gets up and leaves the table, apologizing. Outside, on the crosswalk, he has flashbacks again. He sees a bus coming. He leans forward a bit but pulls back before getting hit.

Jamie meets with Leela who is in labor. She delivers with her midwife in a pool. As she pushes, Jamie continues to have flashbacks of the digging, the dirt, the shovel, the light in the dark woods.

Jamie is awake watching the baby when Leela comes in. He stayed up all night just in case their baby stopped breathing. She smiles, telling him to relax. She leaves the room. He sees Nick sitting in the chair across from him. He moves rooms, but Nick keeps following him.

After returning home from the store, Jamie demands Leela’s friend turn over his son who is rocking him.

Its night. Jamie is sitting out in front of his house when Ambrose walks up. Ambrose tells him he can stop lying. He knows he was at Nick’s grave. He also has call logs and other evidence. He is sure this whole thing is haunting Jamie, who admits in a small way it is without confessing anything.

Sonya takes photos of Jamie from a distance. Meanwhile, Ambrose talks to an old professor of Jamie and Nick’s who doesn’t remain Jamie much.

Jamie is reprimanded for telling his students not to go to college. He tells his boss to f*#ck off, she ends their content after telling him not to speak to her that way.

At home, Jamie continues to see Nick while he rocks his son. Nick demands to take the baby. When Leela comes into the room, Jamie is on his knees, telling her to take their son with tears and fear in his eyes.

Ambrose is still working. It’s late. His captain comes to see him. He notices a package from Ambrose’s dad who shares his dad has passed. Jamie comes in, frantic. He wants to talk. Ambrose takes him to get help or at least that is what he says. When they arrive at a Psych Unit, Ambrose tells the front desk Jamie is a threat to himself and others.

When they get into the room for the evaluation and thee questions turn to suicide and hurting others, Jamie freaks. He thinks Ambrose is trying to get him locked up. He won’t admit to much before ending the evaluation, running from Ambrose who has to call the precinct for help.