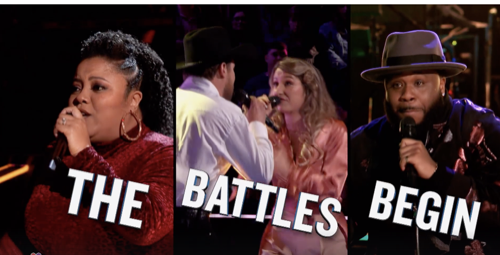 Tonight on NBC’s Emmy Award-winning musical competition The Voice airs with an all-new Monday, March 23, 2020, season 18 episode 6 “The Battles Premiere,” and we have your The Voice recap right below. On tonight’s The Voice season 18 episode 6 “The Battles Premiere,” as per the NBC synopsis, “The “Battle Rounds” begin, and the coaches enlist music industry powerhouses Jonas Brothers (Team Nick), Dua Lipa (Team Kelly), Ella Mai (Team Legend) and Bebe Rexha (Team Blake) to prepare their artists for a dueling duet.

After the vocal face-off, each coach must choose which artist from their team is the strongest to move forward to the “Knockout Rounds.” Each coach has one steal and in a new twist, one save, that will enter their saved artist into a Four-Way Knockout.”

Season 18 Battles are here! Bebe Rexha is advising on Team Blake. Joei Fulco and Todd Michael Hall sing, “The Best,” by Tina Turner. Blake says the two are like classic rock, and it’s coming back.

Coaches Comments: John: “That was so fun and so good, both of your voices fit the song perfectly. Joei your tone is so strong, John I remembered why I wanted you on my team. I couldn’t figure out who was singing which part because you were both fantastic.” Nick: “That performance was like 10 shots of caffeine. Todd, you have a remarkable range and you are a phenomenal singer, I am blown away by you. Joei incredible performance, you tone is so consistent, so cool, it was so much fun and this performance was so much fun.” Kelly: “That was really killer, you have this rasp Joei that was so cool. And Todd, you were like Foreigner, you are incredible.” Blake: “Joei you voice there is something magic about it, you have blend of some icons in there. Todd you were great. Both of you deserve to be here.”

Blake hit his one save just as Kelly was going to steal him.

Dua Lipa is advising for Team Kelly. Chele and Anaya Cheyenne are singing “Scared to be lonely,” by Dua Lipa.

Coaches Comments: Blake: Anaya you have a very diverse way of singing, you come in and out of all different voices. Your head voice is strong, your chest voice, your runs. Chele I felt like there were parts of your performance that got away with you a little bit. You are probably so much better when all these people and lights are gone. Anaya I would go with you.” John: “Both of you are excellent singers, it was just a little more precise with Anaya.” Nick: “This is the second time I have heard you sing Chele, it was great. Anaya, at sixteen I was not as comfortable as you. The edge you have right now is real, but Chele you are incredible.” Kelly: “You both have an amazing range, I wanted to see who was going to push themselves the most. Be sure you own the moment because it won’t happen if you don’t.

Nobody saved or stole Chele.

Joe and Kevin Jonas are advising for Team Nick. Joanna Serenko and Roderick Chambers are singing, “When the party is over,” by Billy Idol.

Coaches Comments: Kelly: “That was my favorite battle so far, it was effortless and beautiful, and passionate and wow, the first-time coach. I feel very sorry for Nick, he created a masterpiece and he has to cut half of it off. Joanna when you started off, I was like, I’m going to pick her. Then Roderick came and I was like, wait, what! It was flawless.” Blake: Joanna you were a four-chair turn, a little more pressure for you, but I feel like you did it again. Robert, on the flip side of that coin, you had one chair turn around, you took advantage of this situation. You guys were more in sync than everyone we have heard so far. I think because of the shock factor, I would pick Robert.” John: “Not only does this song have a lot of range, but it also requires a lot of grace, and presence, and restraint, and both of you showed me in spades. I was stunned with Joanna, We didn’t expect too much from Joanna, but if I were to pick, I would pick Joanna.” Nick: “The growth in Roderick and the growth as a team was really an exhilarating thing for me and I am proud to be your coach. Joanna, you are a flawless singer, and it so exciting to hear your voice and to work with you as a coach.”

John hits his steal for Joanna and says she was perfect in the blinds and she is perfect now.

Coaches Comments: Nick: “That was a true battle, I know you guys are probably friends now but you were just one-upping each other at every turn. Also, shockingly, you were both confident. I don’t what I would do if I were John right now.” Kelly: “You both really have an incredible gift. You are intricate, confident, Zack you open your mouth and I am like, what! I don’t expect the sound that comes out of you to come out of you. Mike, you were like yes mam, but you were fearless. You are both gifted and I don’t have a favorite.” Blake: “I know how John feels like right now. Neither one of you screwed up. Technically the things that Mike can do is overwhelming, but Zach came out and kicked the door open.” John: “It is so interesting because everyone is like everyone is so confident and I was so worried that you guys were not giving me the confidence. You guys delivered this song convincingly and made my job hard.”

Nobody saved or stole Zach.

Back to Team Blake with Bebe Rexha, Jamal Corrie and Levi Watkins are singing, “Counting Stars,” by One Republic.

Coaches Comments: John: Jamal what I liked about your voice was your higher-end, and Levi wow, you hit some high stuff too. I was waiting for you to mess up and you didn’t. I would definitely lean towards Levi for this battle.” Nick: “I am mad, why are you not on my team Levi. Are you type 1 diabetic, so am I and we could have been diabetic buddies, I am sorry I didn’t turn my chair, I was wrong. Jamal I loved your energy, I love to see your friendship, it is kind of like me and Blake.” Kelly: “I do think we are shortchanging Jamal, I loved that you were so adventurous, I take passion over perfection every time.” Blake: “My favorite thing that happened is at the beginning, Jamal has this way of performing where he is bouncing around on stage and Levi is like, oh that is what we are doing. Jamal, I am wondering if the running around is what caused the pitch issues. Levi you being fourteen is so impressive.”

Nobody saved or stole Jamal.

Nick is back with his brothers, Allegra Miles and Michael Williams are singing, “How Will I Know,” by Whitney Houston.

Coaches Comments: Kelly: “That was so good. What a great pairing. Michael, you came in strong, you kept going higher and higher. You have a magnificent tool as a voice. Allegra, I am in love with your voice, your tone has a story. Your voice is really cool. I love both of you but Allegra’s tone is a finale tone.” Blake: “Congratulations on a killer battle performance, it wasn’t a battle it was just a great duet. You can see you both have a great friendship and are rooting for each other. Michael, you are a great singer, Allegra I have been making songs for twenty years now and rarely have I heard your tone. I would pick Allegra.” John: “This was lovely to listen to, it was cool. Michael, I got some Nick vibes from you, you have range, power, and control. Allegra, your tone is special and magical. You are both magical singers.” Nick: “From the moment I heard this arrangement, I knew I had heard something special and it makes my decision that much harder.”