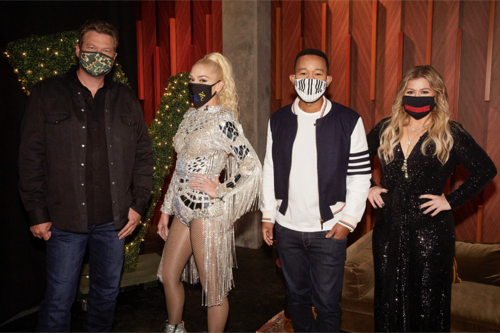 Tonight on NBC’s Emmy Award-winning musical competition The Voice airs with an all-new Tuesday, October 20, 2020, season 19 episode 2 “The Blind Auditions, Part 2,” and we have your The Voice recap right below. On tonight’s The Voice season 19 episode 1 “The Blind Auditions” as per the NBC synopsis, “The “Blind Auditions” continue as superstar coaches all vie to discover and coach the next singing phenomenon. The vocalists compete to be selected by one of the coaches and fight for a chance to be named “The Voice.”

It’s the second night of Blind Auditions. The Blinds give the judges a chance to build up their teams and everyone was looking for something or someone in particular. They were all looking for the singer that moves them. The judges didn’t just want to hear a great singer. They wanted to feel like they were in the presence of a great singer and up first was Taryn Papa. She was from Nashville. She actually played at Blake’s bar there and so she was shooting for Blake as her coach. Blake didn’t win for like five seasons. Then he came out with a win and now he’s letting get to his head. Blake wore a crown and sash behind the scenes. And it probably won’t help his big head that such an amazing singer wanted him as her coach.

Taryn chose the song “Anyway”. She did really well with the song and Blake was the first person to turn for her. Blake also knew that Kelly would turn for her as well. He blocked Kelly and so he just had to worry about Gwen. Gwen also turned for Taryn. She usually leaves the country singers to Kelly and Blake, but tonight she wanted someone like that to be on her team and so it sucked that Taryn was aiming for someone else. Taryn told the group about her background. She’s been singing in Nashville for seven years and she’s still hasn’t the big success she’s looking for. So, Blake was her guy and she chose him as her coach. It took Blake several years to make it big. He knew country and he knew what Taryn needed as a coach.

Blake of course denied blocking Kelly. Only everyone knew it was him and now he’s used up his blocks. Blake and the others next watched a performance from Liam St. John. Liam once was a track and field star. He was competing overseas. He could have gone on to have a career in it as a professional and yet one day he just dropped it. He decided he wanted to pursue his passion as a singer. He came back to the states and he formed a band. The band has been doing really well. They opened up for a notable singer and now Liam is pursuing a solo career. He sang the song “Sex and Candy” and two coaches turned for him. Both Blake and Gwen turned for him. They were the mom and dad of the season and so Liam had a hard time choosing between them.

Liam ultimately went with Gwen just because her style was closer to his. Which frustrated Blake because Blake likes to believe he can coach any style and so he had to wait patiently for his next opportunity. Next up was Faye Moffett. She was a singer and she was doing well in making a career out of it when the pandemic hit. The pandemic took away a lot of those opportunities. Faye suddenly didn’t know how to maintain her career under such strain and that was hard for her because she’s working since she was a kid. She took on jobs when she was young because she hadn’t wanted to burden her mother. And so she put all of her frustrations into her music. She performed “Anyone” and sadly it wasn’t enough for the judges.

The judges didn’t turn for Faye. They thought she was talented and so it was more her song selection. It’s tough when they pick the wrong song. It was a Demi Lovato song and Demi performs by signing and speaking this one song. It therefore would have been better if Faye had tried to do the same and she didn’t. She let a wonderful chance pass her by. Next up was Aaron Scott. He was a father and husband. He was also a teacher. He had a situation a few years back when he felt depressed and anxious. He was diagnosed with depression. He turned to music to help him get a handle on his condition. Aaron was doing better now. He was a rocker at heart and it helped his performance of “Hemorrhage” which is also known as “In My Hands”.

Aaron must have done really well with his opener because John quickly turned for him. This was the first time of the night that John has turned for someone and he wasn’t the only one. Blake turned too. Blake and John had a battle of words over Aaron. They both made their cases and they did the utmost to convince him to pick one of them. Aaron ended up going with Blake. Blake understood he was a rocker and so he really was the best fit. Blake has been picking up people tonight. He had two seats filled from yesterday. He gave two more seats away tonight and so that leaves six seats he has left. And Kelly would have filled more of her seats except she was the most blocked coach this season.

Madeline Consoer went next. She grew up in a supportive household and her parents have always believed in her. They even let her drop out of college and helped her move to Nashville after she fell in love with the place during Spring Break. Madeline works on Broadway. She also performs in her free time and so she was coming to the table with experience. She performed the song “Girl” tonight. Kelly turned for her and Blake would have done so as well. Its just he spotted Kelly pressing the block button and so he decided not to give her what she wanted. And in hindsight, that was silly because now Kelly can use her block on another occasion and she also picked up an artist that both of them wanted.

Cami Clune went next. She’s from Buffalo, NY and she suffers from a rare condition that causes her to experience pain if she moves her joints. Cami was all set to pursue a musical performance degree when this condition prevented her from doing so. She now looks toward the show to help her accomplish her dream. Cami performed “Skinny Love” and she received a rare four-chair turn. The judges loved her. They all wanted her on their team and so of course this was the moment that Kelly used her block on Blake. He came to regret not letting her block him before. He had his head in his hands at the missed opportunity and Cami didn’t even pick Kelly. She picked John. John won over her over by telling her there’s no one like her on his team.

Next up was Parede Valente-Johnson. His name is often mispronounced and misspelled by anyone outside of the family, but it’s his name and he’s proud of it. Parede chose the song “Crossroads”. He has a gravelly voice and so he definitely hit all those high notes. It’s just he never made it soft. He was constantly on ten and the judges weren’t able to get a feel of his true talents. None of them turned for him. They later told him that he should have chosen a different song because often it’s the song, not the singer that doesn’t make the performance and so Parede took in everything the judges said. There was always next year. He can come back and maybe get some practice in. This was his first performance and so he was still feeling his way.

Ryan Gallagher went next. He performed the song “The Prayer” and he hadn’t sung it in English. Like original. Ryan won over Kelly and she turned for him, but at the very last minute so did Blake. Blake tried to claim that Kelly has other opera singers on her team. He claimed that Kelly wasn’t as great as him and he really tried to win over Ryan. Ryan had a tough choice. Should he choose Kelly who has worked with opera singers before or should he go with Blake who was funnier? Ryan went with Kelly. He said Blake was his first pick and that he changed his mind. He went with Kelly because he knew they could work well together. And so Ryan was another to get a Team Kelly jacket.

Chloe Hogan was from Orlando, Florida. She went to a performing arts high school and, while most of her family weren’t musical, she was told her grandfather once was. Her grandfather had his voice box removed from before she was born. She never heard her grandfather speak or sing and sadly he passed away. Chloe remembers her grandfather fondly. She dedicated the performance to him and in honor of what the world was going through. She chose the song “What the World Needs Now Is Love”. She won over Gwen who quickly turns for her. The others chose to sit this one out because they later said there were pitch issues and so it made sense that when they did get to see her they saw how young she was. She was still learning and Gwen will be the perfect fit for her.

Next up was Kiari Mhoon. He was gay and he was in the military. He signed up to join as a way to take care of his family. He hoped that one day he can continue to support his family with his singing. He performed the song “Wanted”. He gave it all and unfortunately none of the judges turned for him. They said he was talented. They heard about three different performances while he was onstage and so it was the shakiness of the performance that prevented them from turning. But there was potential there. Kiari merely has to work on it and he could do that by the time next season rolls around. Sid Kingsley went next. Sid traveled to the show by train. He said he hates flying because it’s being crammed into a tube 30,000 feet in the air and so he was sticking with trains.

Sid performed the song “Don’t Think Twice, It’s All Right”. On his second note, he won over both Gwen and John and he won over Blake with his third. Blake was his family’s pick. His mother was especially a big fan of Blake and so Sid disappointed her when he picked John.