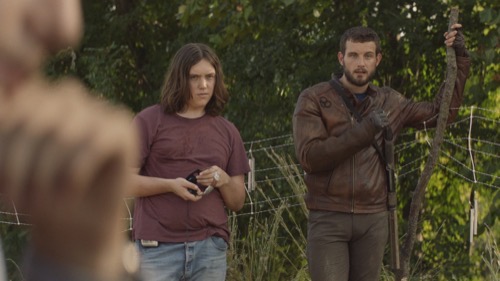 The show opens with shadow puppets showing the world as it was and how it got to where they are now. Iris, Hope, Silas, and Elton are being threatened by a guy with a branch. Felix comes behind the guy and tells him to drop the branch. Elvis and Silas check the perimeter to see if he has any friends. His name is Percy, he is alone. Iris invites him to eat with them.

During the meal, Percy tells his story. His stuff was stolen and he wants it back, it happened a couple of days ago at a settlement. He says he fell asleep when he woke up the people were gone and so was his stuff. He is going back there to get what is his. Felix gives him some advice, be thankful for his life and move on. Percy says somethings just can’t be replaced.

Silas goes off with Felix, he says maybe they can just give Percy some supplies and let him go. Meanwhile, Percy is telling stories to the girls and Elton, they seem to be enjoying them. While he is telling his story of going from Florida to Wyoming really fast, Hope realizes that he is looking for his car. Percy admits he does own a truck and it is full of refined fuel. Iris tells him that they will help him find his truck, but he needs to give them a ride. Felix says that at dawn, they are going to find that truck.

After Elton sprat paints a message for Huck telling her that will be back soon, the group head out. During the walk, Elton talks to Hope about his mother and the literary work he is continuing on her behalf. Hope offers to help him with it. Percy and Iris walk ahead, he tells her that if she and her friends are not careful, they are going to get themselves killed out there. She tells him that they have killed a bunch of empties and they are going to be ok. Then she tells him about her dad. Felix and Silas are in the back of the group, Silas tells Felix that he doesn’t like Percy and doesn’t know how anybody else does.

They arrive at their destination and immediately see the truck. Percy wants to smash and grab, he claims he can hotwire it. Percy heads to the truck, Felix is with him; they see a dead body of a guy named Tony in the truck.

Percy finds that a plate has been bolted over the ignition wires; the rest of the group approaches and Felix is upset. Percy grabs a knife from the dead guy and says he is going to get the keys, Iris goes running after him and Felix says no, he will go. Felix takes Elton and Hope with him, he leaves Iris and Hope behind to watch their things.

Iris tells Silas that she can’t take it, she is going in. Silas tells her that he doesn’t trust Percy, but he won’t stop her. Iris goes in a back way and gets spooked by a mannequin in the corner near the door; she meets back up with Percy and tells him that she is there to help. All of a sudden, an empty reaches its arm through a wall and almost grabs Iris. Meanwhile, Felix is looking around on his own, he sees an empty and goes to attack, but it’s a mirror, he quickly turns around and kills it. Upstairs, Percy and Iris find the keys.

He gives them to Iris, he tells her to go get Felix, he is just going to grab his things and he will meet them outside. Iris is almost down the stairs and she hears a gunshot. She turns around and heads back upstairs to see if Percy is ok. Meanwhile, Silas is on the lookout but not doing a good job. Tony is not dead, he has taken all their stuff and the truck. Iris finds an empty in a bathtub and a backpack full of crumpled paper.

She runs out of the building and sees Percy leaving, he is obviously teamed up with Tony. Iris falls into a garbage container with two empties, the group tries to save her as a whole group of empties start coming after them. Percy and Tony come back for them just in time.

They pull over, Felix tells Tony and Percy off for robbing them. Tony says they turned around to save them and that is as good as it gets around there. Turns out, Tony was an illusionist in Las Vegas back in the day. Hope asks Percy if he is his uncle’s protégé. Percy follows Iris down by the water and asks her if she is going to be mad at her forever. She tells him to stop pretending he cares.

Hope is with Elton, she tells him that she would love to read his mother’s book one day. Hope opens the book and sees a photo of his all too familiar mother.

Felix is speaking to Tony who says he will give them a ride and he is familiar with the Civic Republic. Later, at dark, Tony and Percy put on a shadow puppet show for the group. The girls are very tearfully emotional from the show.

We see Dr. Lyla Bellshaw opening a file that has a card in it with what looks like a drawing of Hope and Iris, inside the card it reads, “dad, hurry up and finish saving the world so you can come home, we love you. Hope and Iris.” She gets a call and says to the person on the phone that everything will be done before they get there, and Dr. Bennett won’t be a problem either, his security detail won’t be either.