The Young and the Restless Spoilers: 3 Current Y&R Characters Who Could Crossover To The Bold and the Beautiful On New Episodes

BY Sean O'Brien on June 14, 2020 | Comments: Leave Comments
Related : Soap Opera, Spoiler, Television, The Bold and the Beautiful, The Young and the Restless 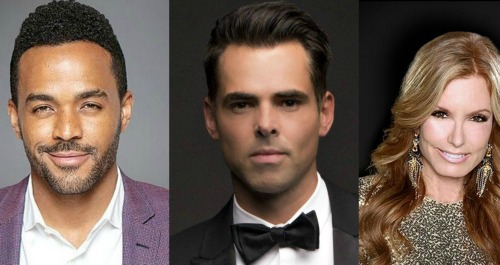 The Young and the Restless spoilers document a week’s worth of classic episodes will play out where Y&R characters crossed over to B&B in the past. Genoa City, Wisconsin, residents from Victor Newman (Eric Braeden) to the late Katherine Chancellor (Jeanne Cooper) will be seen.

Fans know that B&B, which is Y&R’s sister show, debuted in 1987. Various characters from one daytime drama have appeared on the other through the years. In 1992, Sheila Carter (Kimberlin Brown) became the first Y&R character to be seen on B&B. In 1993, Eric Forrester (John McCook) became the first B&B character to appear on Y&R.

Sheila hasn’t been seen in Los Angeles, California, since 2018. She was causing trouble back then in hopes of reviving a relationship with Eric. Quinn Forrester (Rena Sofer) eventually came to physically fight Sheila, which served to reveal her plans and facilitate her seeming exit from Los Angeles, California. Since she hasn’t been since in Genoa City, Wisconsin, Sheila could reappear in LA at any time.

Long before Sheila battled with Quinn, she threw down with Lauren Fenmore (Tracey Bregman) in GC. B&B fans also saw Sheila and Lauren’s initial LA skirmishes in the early 1990’s.

There was a continuity issue with Brown’s last appearance on B&B. Eric didn’t immediately contact Lauren when Sheila arrived in town in 2017, though he and others talked about wild stories involving this character’s public history. Sheila shrugged that off, without providing details.

Sheila’s presumed demise and the supposed face change surgery she had in the mid 2000’s, where she came to resemble Phyllis Summers (Michelle Stafford in a dual role), should have compelled Eric to call Lauren. He didn’t, but should do so if Sheila returns.

Devoted daytime fans know that Justin Barber (Aaron Spears) and Olivia Winters (Tonya Lee Williams) are cousins on their father’s side of the family. Olivia’s maiden name was Barber.

B&B fans know that Spears went to recurring contract status in the recent past. Hopefully he can return to regular status. An open-ended storyline could also be addressed, where Justin pursues information regarding his late niece, Emma Barber (Nia Sioux).

Nate Hastings (Sean Dominic) could be attending a medical conference in LA. He would also visit with Justin, with both men then working to find answers about their family member’s unusual car accident on Mulholland Drive.

Billy Abbott (Jason Thompson) is in between serious relationships right now. He’s interested in Amanda Sinclair (Mishael Morgan) and hasn’t fully given up on Lily Winters (Christel Khalil), though she gave him a firm brush off merely for hinting that they reconnect.

Considering Steffy Forrester’s (Jacqueline MacInnes Wood) single status, it’s fair to assume that she could field a call from Billy. He could pitch her an idea about Chancellor Industries media division having synergy with Forrester Creations. That scene could be just one phone call, or involve Billy actually traveling to LA.