BY hellodrdavis on March 8, 2020 | Comments: one comment
Related : Soap Opera, Spoiler, Television, The Young and the Restless 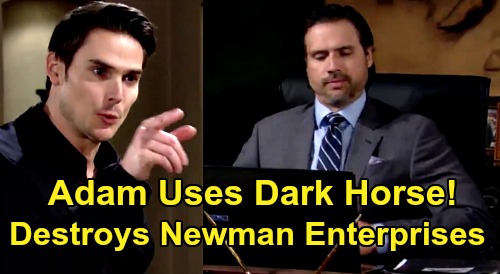 The Young and the Restless spoilers tease that Adam Newman (Mark Grossman) will be absolutely incensed with the situation he finds himself in. As Y&R viewers know, he recently rallied with his family when Victoria Newman (Amelia Heinle) was stabbed in a terrible case of mistaken identity.

Despite all of the problems that he’s had with his family in the past, Adam showed up and supported Victor Newman (Eric Braeden) and everyone else.

Then, he made a genuine offer to Victor about filling in for Victoria as CEO of Newman Enterprises while she recovered from her injuries. Adam told Victor that he wanted to put their past differences aside and step up for the family.

Nick Newman (Joshua Morrow) was adamant about not wanting the job, and Adam pitched himself to Victor as the natural choice.

But according to the Young and the Restless spoilers, Adam won’t get the chance to become interim CEO of Newman Enterprises. As it turns out, after a little prompting from Phyllis Summers (Michelle Stafford), Nick will decide that the wants to take the CEO position after all.

It looks like he’ll do it mainly to keep Adam out of the top spot, and Victor will give the position to Nick. That’s going to infuriate Adam, and he’ll see Nick’s move for exactly what it is – a blatant attempt to thwart him.

Well, it looks like from there, Adam will vow to get revenge on Nick and Victor. Adam will feel like Victor played him, but how will he ultimately get his revenge?

As Y&R viewers know, Adam recently told Chelsea Lawson (Melissa Claire Egan) that he wanted to resurrect Dark Horse – the company that he originally took from Nick. It appears that Adam will see a big opportunity here – the opportunity to go after Nick and Victor in business.

Adam might decide that he’ll bring Dark Horse back with a vengeance and go after Nick head to head that way. After all, it seems that Adam is done going after his family on a personal level, but he could decide to destroy Newman Enterprises with his business savvy.

Adam could put together a killer organization and battle his family legitimately and fairly, and he’d probably stand a good chance of winning.

He’d probably also see an opportunity to cause chaos within his family, since he knows that once Nick starts battling him in business, he’s probably not going to want to give up the Newman CEO position to Victoria. And he’d know that it would probably really irritate Nick to have to do battle against the very company he formed, then lost to Adam.

We’ll see what happens here, but it looks like we may be up for an Adam vs. Nick CEO battle, while Victor no doubt watches on in amusement. Do you think that Adam will use Dark Horse to do battle with his family? Stick with the CBS soap and be sure to check CDL often for the latest Y&R spoilers, updates, and news.