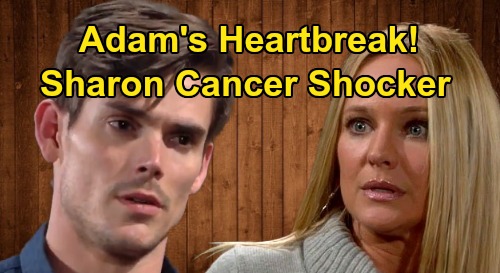 In some ways, it’s ridiculous considering Adam was proposing to this woman last year – and they weren’t even dating at the time! Adam and Sharon may not be a couple, but there’s always going to be a strong “Shadam” bond. That bond was kept alive when Sharon stepped up to help a struggling Connor Newman (Judah Mackey).

Adam’s all in on his relationship with Chelsea Lawson (Melissa Claire Egan), and Sharon’s completely devoted to Rey Rosales (Jordi Vilasuso). Both Adam and Sharon have partners who are standing by them in times of adversity – although Sharon’s adversity is far more serious.

The point is neither Sharon nor Adam are in a place to battle temptation, particularly since Sharon’s sick and almost ready to face surgery. So why doesn’t Adam know about Sharon’s cancer by now? Is Y&R saving that bombshell because it’ll be significant to Adam’s story?

This seems like the kind of thing that could be a real wake-up call for Adam. Maybe it could help Adam realize that there are more important things in life than power and winning. The trouble is Adam may come to that realization too late!

The Young and the Restless spoilers say Adam’s scheme will go horribly wrong in the end. Adam will face terrible ramifications as the result of his blackmail plot, but that doesn’t mean Sharon’s story won’t be a factor.

It’s easy to imagine an emotional Adam talking things over with Sharon and deciding he has to give up this war. Sharon’s been worried about not being around for her kids, so those fears could tug at Adam’s heart strings. It could make Adam want to fix things with Victor Newman (Eric Braeden) since his dad’s still around and there’s still a chance.

Unfortunately, Adam’s plot may come back to bite him before he can undo the damage. Although Adam might turn from his wicked ways, it may be too late – especially if Victoria Newman (Amelia Heinle) gets Billy Abbott (Jason Thompson) to publish the article.

Y&R fans will curious to see if Sharon’s cancer story affects Adam’s storyline, too. Adam at least needs to know what’s going on! As other updates come in, we’ll pass along other hot details.