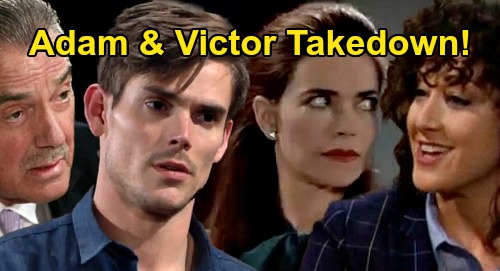 The Young and the Restless (Y&R) spoilers tease that Victoria Newman (Amelia Heinle) will be on a mission to take Adam Newman (Mark Grossman) down – and she may take her father down in the process! Y&R fans know Victor Newman (Eric Braeden) is in a tight spot thanks to Adam. He’s facing a blackmail plot that could do serious damage, even though Victor claims he’s innocent.

The media would have a field day with this news, so Victor has more than one reason to keep it quiet. Avoiding public backlash is one reason, but Victor also seems to have some secrets.

Since Victor denies any responsibility in AJ Montalvo’s death, why did Victor pay off the coroner and have the autopsy change? Victor may have been protecting someone besides himself – namely Adam.

Adam might be to blame for AJ’s demise and not even know it. He was just a kid, so he might’ve blocked out such a terrible memory. Whatever the case, Victor seems to know there’s more to the story. He also intends to play the long game, which is why Victor handed over control of Newman Enterprises to Adam.

However, Victoria has a new frame of mind these days. She’s done letting people like Victor and Billy Abbott (Jason Thompson) control her life. Victoria’s got a new attitude that involves putting herself first. Since Victoria’s been hurt far too many times for far too long, perhaps she’s ready to inflict some pain herself.

Regardless, Victoria isn’t going to just sit back and let Adam win. She’s not going to let Victor burn her like this either. Victoria has no way of knowing how long it’ll take for Victor’s strategy to play out, so she’s finished with family loyalty.

How can Victoria be certain Victor will even follow through on his promise to put her back in power? Victoria isn’t willing to take that chance, so she’ll soon take matters into her own hands.

The Young and the Restless spoilers say Victoria will track Alyssa Montalvo (Maria DiDomenico) down at the Grand Phoenix. It looks like an intriguing conversation is on the way.

Adam only has power over Victor if he’s able to hold this murder over him. Again, Victor claims he’s innocent – so Victor might be confident he can clear his own name in time. After all, Victor never faces consequences for anything else. Why start now? Victoria may feel like Victor could wiggle out of any charges he might face.

With that in mind, it would be in Victoria’s best interest to make sure this story gets released. Adam would lose his leverage, Victor’s name could ultimately be cleared and Victoria could reclaim the throne while it’s happening.

Will Victoria seek Alyssa’s help in accomplishing all that? Will Victoria urge Alyssa to team up with her for Adam’s takedown, which would take down Victor as well?