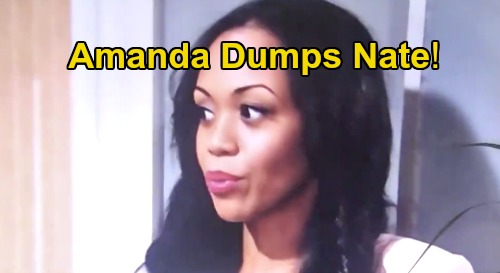 The Young and the Restless (Y&R) spoilers tease that Elena Dawson (Brytni Sarpy) will get some upsetting news when Y&R returns with new episodes starting Monday, August 10.

Y&R fans know Elena made peace with Amanda Sinclair (Mishael Morgan) following the fiasco involving Katherine Chancellor’s (Jeanne Cooper) will. None of that was Amanda’s fault, so they’ve moved past all the drama.

Of course, that’s exactly why The Young and the Restless needs to stir up another round of it! The trouble may start after Amanda pulls back from Nate Hastings (Sean Dominic) on Wednesday, August 12. Based on Nate’s track record, he may end up scaring Amanda away.

Y&R viewers will recall how pushy Nate was when he first started dating Abby Newman (Melissa Ordway). Nate and Abby weren’t really on the same page from the get-go since Abby wanted to go slow.

Meanwhile, Nate was trying to plan a big trip together and rush things along. It’s clear that Nate has trouble listening to his love interests and going at the pace they want.

Amanda managed to tear down some of her walls, but she’s still got some emotional scars due to everything she went through with Ripley Turner (Christian Keyes).

Even if Nate can respect the pace Amanda has in mind, she may freak out a bit as the idea of this relationship becomes real. That may be why Amanda suddenly ends this romance before it truly even begins.

Although Amanda might tell Nate she needs more time, he may wonder if he’s the problem here. As for Elena, she’s bound to get updates and express her disappointment. Elena was rooting for Amanda and Nate, so she may confront Amanda about why she’s ditching or at least pulling back from such a great guy.

This would be the perfect opportunity to create conflict again, especially since Amanda will grow closer to Devon Hamilton (Bryton James) on Friday, August 14. Elena’s as sweet as sweet can be, but jealousy can make people lash out. Elena’s certainly shown us that she can have a temper at times – and this may be one of those times!

If Amanda and Devon continue to bond, Elena might think Amanda dumped Nate so she could focus on Devon instead. Maybe Elena could take a stand and declare that her man’s off-limits! Amanda and Elena’s friendship may go right out the window – regardless of Amanda’s intentions.

It’d be fun to see Elena and Amanda clash once new episodes start back up, so we’ll see how it goes. The Young and the Restless spoilers say there’ll be tons of drama happening in Genoa City soon, so stay tuned.

CDL will have other terrific Young and the Restless spoilers, updates and news to catch up on, so make us your number one source.