The Young and the Restless Spoilers: Battle of the Adam Newmans – Has Mark Grossman Won You Over – Do You Prefer Michael Muhney or Justin Hartley? 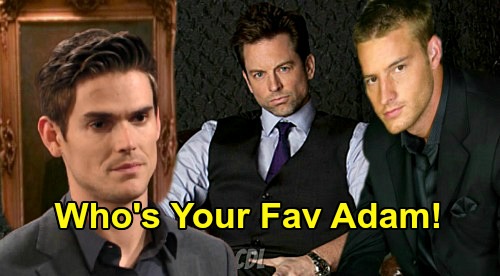 The Young and the Restless (Y&R) spoilers reveal that Adam Newman (Mark Grossman) has settled into the role of Adam nicely. He debuted in 2019 to a mixed reaction, but it feels like Grossman has won over many Y&R fans with his portrayal. In a recent interview with Soap Opera Digest, a casting associate talked about the casting process and how they knew Grossman was the right fit for the part.

Gregory Salmon has been a casting associate at The Young and the Restless since 2011, so he’s been part of the team for quite some time. Salmon has worked with the rest of the casting department to find some fantastic actors for both new roles and recasts. He spoke about something he really enjoys about his job – and that’s casting parts with legacy family connections.

“I…love casting roles connected to legacy characters because of all the show history a legacy character brings to the canvas,” Salmon said. As another fun tidbit, Salmon admitted that under-five roles are often some of the hardest to cast. If someone’s only got a few lines, it can be challenging to nail down exactly the right interpretation.

Of course, there’s surely a lot of pressure when it comes to larger roles. Finding another Adam was undoubtedly a tall order since Grossman had some big shoes to fill. However, Salmon admitted that Grossman really wowed the casting department. He acknowledged Grossman when asked about a “recent this-actor-was-made-for-the-role moment.”

“I remember the screen test for Mark Grossman, who plays Adam,” Salmon said. “We had been searching for a new Adam for quite a while and when Mark screen-tested, you just knew he had Adam in his blood.”

That brings us to some interesting questions for Young and the Restless fans. Do you agree that Grossman has Adam in his blood? Has he won your approval as a recast or do you still miss a previous version of Adam?

Michael Muhney still has plenty of fans who prefer his Adam. Those fans were disappointed when Michael Muhney wasn’t brought back following Justin Hartley’s departure. Speaking of Justin Hartley, loads of viewers miss his version of Adam as well. Hartley’s found success on NBC’s This Is Us and in films, but that doesn’t mean he isn’t longed for!

Others feel like Grossman has found his groove and brings something special to the table. He puts his own spin on Adam – as all actors playing the role should. Sometimes a new actor just takes a little getting used to. Grossman has a lot of supporters out there, even from Y&R fans who liked other Adams.