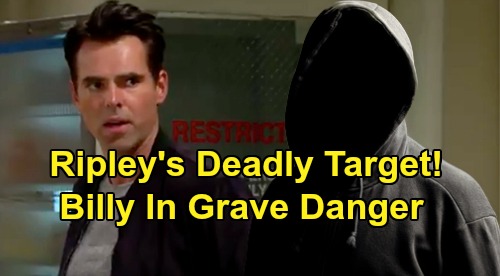 The Young and the Restless (Y&R) spoilers tease that danger is brewing in Genoa City. Since we know Amanda Sinclair (Mishael Morgan) suffered horrific abuse at her ex-fiancé’s hands, the clock is ticking on when he’ll show up and wreak havoc.

Amanda received an eerie phone call where no one spoke on the other end. She’s been tracking this abusive ex of hers, but she feared he might’ve discovered the tracker at one point.

This guy is obviously vicious and terrible, so he could easily fool Amanda by making sure that tracker’s on somebody else. Devon Hamilton (Bryton James) found out this man’s name is Ripley Turner, which is a soap villain’s name if we’ve ever heard one!

“Ripley” certainly sounds like someone who could cause total chaos in Genoa City. It seems that’ll indeed happen down the road.

The Young and the Restless spoilers say Billy and Amanda will ultimately find themselves in a dangerous situation. When the hostage crisis forced the Grand Phoenix into lockdown, Amanda was in panic mode. She didn’t like the thought of being trapped in there – just a sitting target for her abusive ex to pounce on.

However, Ripley may come on the scene and force Amanda into another situation where she feels trapped. Could he hold Amanda hostage with Billy?

Again, Y&R fans can expect Billy and Amanda to face a dangerous dilemma together. It makes sense that it’ll have something to do with abusive Ripley and his controlling nature.

Ripley isn’t going to approve of Amanda’s growing bond with a new man. The restraining orders Amanda and Ripley filed aren’t going to make a difference to him either.

All the pieces are in play for Ripley to arrive on a dark mission. He’ll probably assume Billy is Amanda’s new main squeeze, which could make Billy a deadly target.

Now that the hospital set’s back up, The Young and the Restless may find several ways to use it. Billy could be injured and hospitalized if Y&R stays true to how dangerous Ripley seems to be.

If Billy is Amanda’s hero in all of this, will it convince her they should be more than friends? Billy and Amanda will definitely deal with questions about their relationship after the next phase of the story.

There’s also the matter of Victoria Newman (Amelia Heinle) and how overwhelmed she’ll feel. She’s always going to love Billy and will worry about her children potentially losing their father.

As an abuse victim herself, Victoria should be glad Billy saved Amanda if that’s the way this hot plot turns out. At the same time, Victoria’s bound to feel jealous over Amanda and Billy’s intense connection – which could get even more intense after this frightening ordeal.