The Young and the Restless Spoilers: Billy Leaves Genoa City – Breaks Up With Victoria, Loses Amanda – Kicks Off Mission to Find Himself 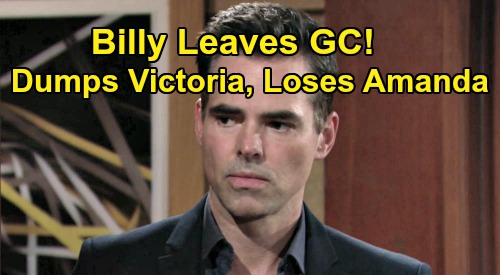 The Young and the Restless (Y&R) spoilers tease that some big decisions are coming up on the CBS soap. For starters, Amanda Sinclair (Mishael Morgan) will determine that her friendship with Billy Abbott (Jason Thompson) isn’t working for her. She’s enjoyed getting to know Billy and leaning on him for support, but things have gotten a bit weird.

Amanda won’t like the idea of being the reason Billy blows up his almost marriage. Furthermore, Amanda already insisted she wasn’t looking for romance. Part of her may still feel like Billy wants that, but it’s just not something she can give him – at least not right now.

Y&R fans can expect Amanda to shock Billy with some firm boundaries. In fact, Amanda will cut Billy out of her life completely!

That seems a bit extreme, but Amanda may be scared deep down. She was madly in love with her ex-fiancé, Ripley Turner (Christian Keyes), but he turned out to be a total monster.

Amanda may fear that Billy will change as well. Now that they’ve gotten too close for comfort, it makes sense that Amanda would run in the opposite direction. She’s an abuse victim with serious trust issues, so she wants to protect herself.

Billy won’t like the idea of losing his favorite confidante, but it looks like he’ll ultimately respect Amanda’s wishes. He won’t want to be pushy under the circumstances.

Amanda may expect Billy and Victoria to work things out if she backs off, but The Young and the Restless spoilers say that’s not going to happen.

After all, Amanda isn’t the heart of the problem. It’s the fact that Billy feels like Victoria wants to fix him. Billy doesn’t think he’s broken, so he’ll refuse to go back to therapy. He’ll tell Victoria he can’t be the man she wants him to be and break up with her.

Afterward, Billy will need to do some real soul-searching. He should feel pretty lost thanks to all these changes, but he’ll do his best to press on. The Young and the Restless spoilers say Billy will decide to leave Genoa City. He’ll think he has to go find himself, so we’ll see where that adventure takes him and for how long.

What do you think about Billy dumping Victoria and trying to find a new path? We’ll give you updates as other Y&R news comes in. Stay tuned to the CBS soap and don’t forget to check CDL often for the latest Young and the Restless spoilers, updates and news.