BY Heather Hughes on March 24, 2020 | Comments: one comment
Related : Soap Opera, Spoiler, Television, The Young and the Restless 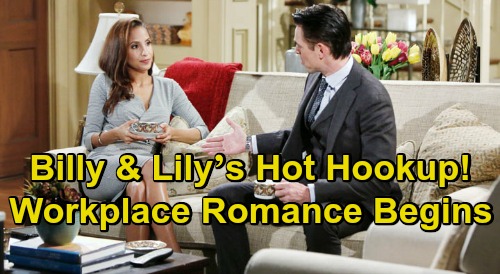 The Young and the Restless (Y&R) spoilers tease that Billy Abbott (Jason Thompson) and Lily Winters (Christel Khalil) may end up complicating things on the job. Y&R fans know Jill Abbott (Jess Walton) put Billy and Lily in charge of Chancellor Media. There have been a few bumps in the road so far, but they’re working hard to combine their visions and hopefully find success.

Despite some bickering here and there, Lily and Billy know how to enjoy each other’s company. There’s an easy rapport that’s reminiscent of Billy’s bond with Amanda Sinclair (Mishael Morgan) – only without all the guilt and baggage.

After that whole Ripley Turner (Christian Keyes) ordeal and how it affected Victoria Newman (Amelia Heinle), it was probably best that Amanda wanted to stick to friendship. Y&R spoilers say Amanda will remain drawn to Billy in the weeks ahead, but Nate Hastings (Sean Dominic) seems to be the love interest Y&R has in mind for her.

As for Billy, he’s really throwing himself into this project and seems excited to have something to focus on. The Young and the Restless also brought back the Dark Horse set to use as Chancellor Media’s new office space, which seems significant. Y&R’s investing in this storyline, which will surely go beyond just business.

Most fans don’t care about marketing strategies, mergers and deals. They care about characters and connections. We should also consider the fact that Billy and Amanda’s friendship ultimately went nowhere. The Young and the Restless can’t do the same thing now, so they’ll want to step up their game.

In other words, Billy and Lily need to be more than friends and partners. They also need to do more than just kiss! Nick Newman (Joshua Morrow) and Phyllis Summers (Michelle Stafford) recently indulged in an office hookup – right there on Nick’s desk at Newman Enterprises. Could Lily and Billy be the next Y&R duo to get hot and heavy?

The Young and the Restless spoilers say this storyline will come with some surprises, so Lily and Billy may even surprise themselves by surrendering to temptation. Perhaps there’ll be some scenario where they get into an explosive argument in Lily’s office and just can’t take the tension – in more ways than one!

There’s no point in doing this storyline unless we get some steaminess out of it, so there’s a good chance Y&R will deliver. Of course, the aftermath of a hookup could be pretty interesting. Billy and Lily probably wouldn’t want Jill, Victoria or anyone else to know initially. This could lead to a secret “forbidden” romance that might be fun.

Do you think Lily and Billy will hook up soon? How do you feel about their chemistry? As other news emerges, be sure to stop by frequently for Y&R updates. It sounds like things could sizzle at Chancellor Media soon! CDL will have more Young and the Restless spoilers, updates and news as the action heats up.