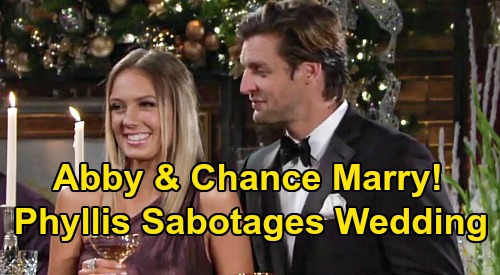 The Young and the Restless spoilers document that Chance Chancellor (Donny Boaz) and Abby Newman’s (Melissa Ordway) relationship is quickly developing. This likable couple appears on the path to marriage in the near future.

Chabs formed shortly after Boaz’ character was written back into the show. The initial spark seen between Chance and Abby included Phyllis Summers’ (Michelle Stafford) apparent interference. In fact, Red was actually looking to determine why Chance and Adam Newman (Mark Grossman) were familiar with each other in Las Vegas, Nevada.

Phyllis’ initially flirtatious overtures bothered Abby, until she was sure that Chance was wise to the game. The tie between the then Spider and Chance was eventually established, with Phyllis gaining momentary leverage over this pair of adversaries.

Phyllis paid a cocktail waitress to plant a listening device under the table where Chance and Adam were discussing what happened between them in the recent past. As she and the audience learned for the first time, Chance was working undercover pursuing a criminal when circumstances turned deadly.

As Adam told it, this character that wasn’t shown in a retrospective scene was attempting to kill Chance. Adam intervened, the man lunged at Grossman’s alter ego and was killed.

Adam’s admission, of having killed that person in self-defense, explains Chance’s continued loyalty. That public conversation wasn’t something either man would have normally engaged in. But its reckless nature gave Phyllis a weapon that she’s since lost control of.

Phyllis recently went to Abby and Chance with good intentions as part of her efforts to help Nick Newman (Joshua Morrow).

Abby didn’t actually admit to impersonating Phyllis in order to steal the memory stick that was taken from her bank’s safe deposit box. Ordway’s character and Chance plotted that heist in order to seize what they believed was the last piece of evidence that implicated Boaz’ character in a crime.

Chabs realized, through Phyllis’ surprising forthrightness and admission, that she’d hoped they’d retained the digital device. Phyllis wanted to give it to Nick so that he could help the Newman’s fight Adam’s corporate coup.

Young And The Restless Spoilers – Past Differences Not Buried

Phyllis is not going away, as her one-off meeting with Abby and Chance was purposeful and pursued in favor of Nick. As Chabs grows closer, their bond will deepen.

Abby’s next husband appears obvious. But Phyllis surely won’t let that projected wedding day go to waste. It would be her style to lay low and then pounce when the nuptials happen.