The Young and the Restless Spoilers: Chance Needs To Stop Protecting Adam – Will He Finally Choose Abby Over Old Vegas Friend? 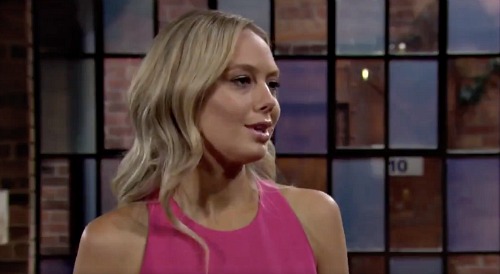 The Young and the Restless spoilers tease that Chance Chancellor (Donny Boaz) may have a big decision to make in the coming days. As Y&R viewers know, Chance recently fended off a bunch of nosey questions from Alyssa Montalvo (Maria DiDomenico), who is gunning to dig up dirt on Adam Newman (Mark Grossman).

Of course, Chance and Adam were totally in it together back in Las Vegas, and a man ended up dead and is now presumed missing. It’s a real mess.

Well, the story that Adam and Chance thought would stay buried in Vegas could now really come back to bite. Alyssa wants Adam to pay for killing her father AJ Montalvo back in Kansas all those years ago, and she’d settle for making Adam’s life miserable by dredging up what happened in Las Vegas.

Alyssa would love for Adam to go down for any crime, and she doesn’t really care who gets hurt in the process.

Of course, Chance is in the middle of all of this, and he feels that he owes Adam big time, since Adam protected Chance from the man who ended up dead in Las Vegas.

That’s why Chance has been so good to Adam since he’s come back to Genoa City, and it’s why Chance agreed to track Adam down for Chelsea Lawson (Melissa Claire Egan) when he went missing.

And now Chance knows the secret about Adam killing AJ as a young boy – something that Abby Newman (Melissa Ordway) doesn’t even know. Well, one wonders how much longer Chance will continue to keep things from Abby where Adam is concerned.

Chance has managed to get by with the whole “agreeing to disagree” thing with Abby when it comes to Adam…so far. But how long will Chance be able to keep what he knows about Adam’s Kansas past from Abby?

If Chance wants a long-term relationship with Abby, then he’s probably going to have to make the decision to put Abby first and let Adam fend for himself.

Let’s face it, Chance’s allegiance to Adam is sort of misplaced, since Adam doesn’t seem to want to have anything to do with Chance these days. Chance may have to fend for himself if the authorities start coming after him!

And then there’s the additional complication that Chance is being actively recruited for the Genoa City Police Department by Paul Williams (Doug Davidson).

Adam could really blow up Chance’s life, especially if he starts to pressure Chance to obfuscate evidence or thwart the investigation from the inside…which would be a very Adam-like move.

We’ll see what happens here, but it’s likely that the story about what happened in Las Vegas is going to come out, and then Chance could have to decide to either go down with Adam or save himself and his relationship with Abby.

What do you think Chance will choose? Stay tuned to the CBS soap, and don’t forget that CDL is your go-to source for all the latest Young and the Restless spoilers and news.