The Young and the Restless Spoilers: Chelsea Kidnapped – Terrified Hostage Dragged Away By Mystery Man 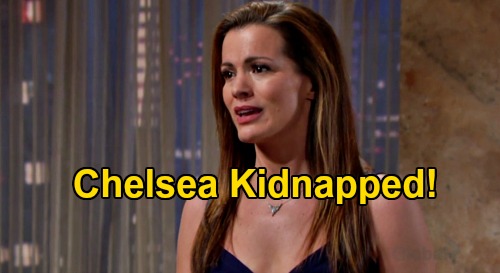 The Young and the Restless (Y&R) spoilers tease that Chelsea Lawson (Melissa Claire Egan) will clash with Adam Newman (Mark Grossman) when she returns to pick up the rest of her belongings.

When Chelsea arrives at the penthouse, Adam will have all Chelsea’s stuff packed up and ready to go. Chelsea will have a tense exchange with Adam before he leaves the room to take a call. That’s when Chelsea will make a shocking discovery.

There’ll be evidence of some sort of plot on the laptop Adam left unattended, so Chelsea will sneak a peek at it. The Young and the Restless spoilers say Chelsea will reel over what she sees on the screen.

Adam will have a visual breakdown of Newman Tower – and there’ll be red Xs to mark spots for whatever Adam has in store.

When Adam comes back in the room, he’ll fume over Chelsea’s snooping. Adam will just want Chelsea to get out, but Chelsea will urge Adam to reveal what he’s planning.

The Young and the Restless spoilers say they’ll spar, but Adam will contend that he’s just searching for new office space and nothing more.

Of course, Chelsea knows Adam better than that! She won’t buy for one second that Adam is doing something as mundane as looking for places to push paper.

This will have villain’s evil master plan written all over it, so Chelsea will grow concerned.

Since Chelsea can tell Adam’s in a terrible state of mind, she’ll be truly fearful about how low he might sink. As a result, The Young and the Restless spoilers say Chelsea will call Chance Chancellor (Donny Boaz) for help.

After Chance agrees to a meeting, Chelsea will wait for him to arrive at the Chancellor mansion. When Chelsea answers the door later, she’ll be stunned when someone grabs her and forces her to leave with him.

Chelsea will be kidnapped by a mystery man, so will that be Adam taking drastic action to salvage his plan or perhaps a more surprising suspect since Y&R’s keeping his identity under wraps?

You can bet Chelsea’s kidnapping crisis will cause plenty of drama regardless!