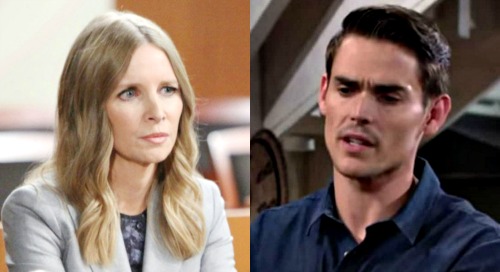 The Young and the Restless spoilers document that Christine Williams (Lauralee Bell) left her position as Genoa City, Wisconsin’s, District Attorney last summer. The longtime attorney hasn’t been practicing in recent months, but can be called upon to use her skills to help an unlikely client in the near future.

Christine’s history with the Newman family is mixed, through the many legal battles that have played out through the years. However, she believes that any innocent person deserves justice. As long as Adam Newman’s (Mark Grossman) recollection of the situation in Las Vegas, Nevada, is accurate, then he’s not guilty of murder and acted in self-defense.

Young And The Restless Spoilers – But What About AJ’s Murder In Kansas?

Well, yes, Adam is believed to have killed two men. But for the moment viewers are only aware of the Vegas situation and the terrible circumstances that took place in Kansas when he was just a boy.

AJ Montalvo (no actor known to be cast for this role) was killed by Adam as a form of defense as well. Hope Wilson (Signy Coleman) contacted Victor Newman (Eric Braeden) immediately after that tragedy took place. The Moustache paid the local Coroner to adjust paperwork, which shielded Adam from the authority’s glare.

This situation is also serious, but appears to present Adam with less trouble because of his status as a non-adult and due to A.J.’s criminal actions.

Young And The Restless Spoilers – Why Christine Williams In This Instance?

Bell is, of course, the daughter of the icons Bill Bell and Lee Phillip Bell, who co-founded Y&R. Bill was the show’s executive producer and head writer for many years. It was during that time that Lauralee joined the cast.

This soap has done a fine job of keeping favored characters in the script, even if just on a part-time basis. Lauralee appears to have chosen to go to recurring status in the past in order to focus on her family and in order to allow other actors to avail themselves of the opportunities and resources that Y&R is able to offer.

Writing Christine into this arc would allow Bell’s character to work a fresh, limited-run storyline that would lead to a definitive end point.

Chance Chancellor (Donny Boaz) was working undercover when Adam helped him out of a very precarious situation. Consequences might result when Chance comes forward to defend someone who he considers to be a friend. But Boaz’ character is a stand-up guy and won’t have a problem answering whatever questions Christine may have for him.

Chance can prove that Adam was defending himself. But Christine’s dexterity would be needed to help Adam and Chance escape prosecution for covering up what happened in Vegas.