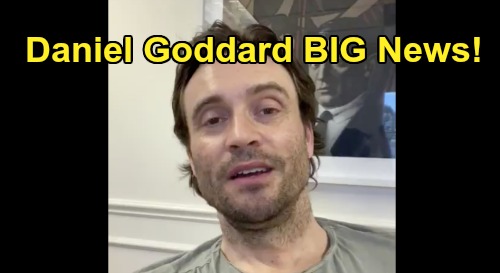 The Young and the Restless spoilers document that Daniel Goddard (Cane Ashby) spoke directly to his fans about some big news. He teased an upcoming major announcement regarding his efforts since departing the cast of Y&R.

The actor’s announcement will be made during the week of May 3 on his Facebook Live page. He asked fans to send any questions to him in the meantime and to let him know about their lives as well.

Goddard wished everyone well and said, “I can’t be begin to tell you how excited I am.”

Goddard joined the cast of Y&R in 2007. His tenure recently ended unexpectedly when Cane was written out of the show during an arc that involved his father, Colin Atkinson (Tristan Rogers).

Jill Atkinson Abbott (Jess Walton), her then married name, Chance Chancellor (Donny Boaz), and Cane were all with Colin in Maldives when Rogers’ character was captured. Colin later escaped, which sent Cane on a mission to find him, as he promised Devon he’d do.

Colin was later arrested, with the money laundering plot seemingly clearing Cane of any involvement. But closure wasn’t fully offered in that regard.

Young And The Restless Spoilers – Strong Run Highlighted By ‘Lane’

Lane likely represents the work that Goddard will be most remembered for, if he doesn’t eventually rejoin the cast. The on-screen chemistry that he and Lily Winters (Christel Khalil) exhibited created one of the show’s beloved couples in the recent past.

A nicely woven link to Goddard’s start on the show was woven in when Chance, Phillip III’s son, was included in Cane’s exit storyline.

Social media users understand that some fans follow more than one of his accounts. Regardless, the individual and combined numbers represent an impressive connection with the fans that he’s worked to earn and maintain.

An actor’s public presence is important in the entertainment world. That’s more true now during these challenging times. So, it’s certain that Goddard’s coming announcement will draw a sizable audience. Do you think Goddard is hinting at a new job, perhaps on a soap?

Life is just a matter of perspective! Because although things may “look one way” it’s how u “choose to see them” that make all the difference! So, I encourage u not to see face masks due to #COVIDー19 but face masks due to spring time allergies! 🙏❤️ #faith #PositiveVibes #YR pic.twitter.com/d2wCP6GCcV

BIG NEWS! I waited so long to share this! Btw… I know it’s not Friday! 🤦🏻‍♂️❤️😂 #QuarantineDiaries pic.twitter.com/2RrmyC4FwJ