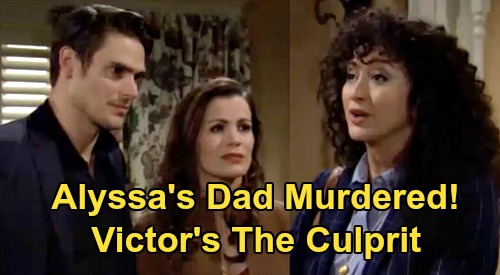 The Young and the Restless (Y&R) spoilers tease that Adam Newman’s (Mark Grossman) trip to Kansas will lead him down an interesting path – one that could give him the upper hand! Y&R fans know Victor Newman (Eric Braeden) burned Adam big time. Adam was furious when Victor changed his mind about giving him the CEO spot and handed it to Nick Newman (Joshua Morrow) instead.

Nick was always Victor’s first choice, but it was still pretty cruel to treat Adam that way. Victor got Adam’s hopes up only to crush them. Now Adam could use some leverage. He needs a way to gain some power over Victor, and he just might get it through a blast from the past.

On Monday, March 16, Adam runs into a familiar face. It’s Adam childhood friend, Alyssa Montalvo (Maria DiDomenico), who grew up to be a crime reporter. Alyssa spends some time catching up with Adam, which leads to a realization.

Although Adam didn’t know Victor was his father back then, he recalls Victor being in town when Alyssa’s father died – supposedly from a barn loft fall.

Alyssa’s dad was a loan shark named AJ who did a stint in jail before his death. When Adam reflects on everything with Chelsea Lawson (Melissa Claire Egan) later, she feels all of this is pretty strange.

The man Adam didn’t realize was his father showed up when Alyssa’s dad kicked the bucket, so that’s awfully suspicious – especially since that ‘man’ happens to be The Moustache!

Naturally, that should make Adam and Y&R fans wonder if Victor was behind AJ’s death. Did Victor kill this loan shark? Adam won’t know, but it looks like he’ll launch an investigation and try to find out.

The Young and the Restless spoilers say Victor will grill Victor when he returns home from this trip. He’ll fish for information on Victor’s history, which could raise a few red flags for Vic.

Adam’s change of heart will also leave Victor skeptical. He knows how his son operates, so he’ll worry that there’s some payback plan in the works. Adam may pretend to make peace all while plotting to use a major bombshell against him.

Will Adam learn Victor indeed murdered AJ? If so, that’d be some great blackmail material. Adam could get the CEO chair and just about anything else he wanted.