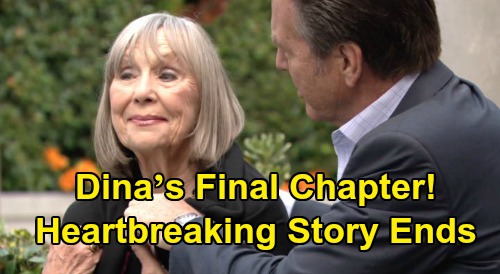 The Young and the Restless (Y&R) spoilers tease that Jack Abbott (Peter Bergman) will receive some unsettling news. He’ll pass it along on Friday, February 28, so what’s this all about? Could it involve Dina Mergeron (Marla Adams)? It’s about time for Y&R to figure out the next chapter for Dina and perhaps start steering this storyline toward the end of the road for her.

At Christmas, Dina enjoyed a wonderful visit home with her family. She lit up over all the presents under the tree and even remembered the words to a holiday song. It was heartwarming to see Dina have a nice Christmas with her family, especially since it might’ve been her last.

If Jack learns something disturbing about Dina, it might involve another incident at her facility. Dina accidentally injured herself a while back, so she could suffer worse injuries this time around. Of course, there could also be another reason for troubling Dina updates. She could become violent with the staff or something along those lines.

Even if Jack’s unsettling news is about something else, Y&R will have to tell Dina’s final chapter eventually. Sadly, Dina’s getting to the point where she’ll no longer have any moments of recognition. Jack and Dina’s other loved ones have tried to make as many memories as possible, which is good since they won’t be able to make many more.

As sad as it’ll be to lose Dina, it has to happen sooner or later. The Young and the Restless writers have done about all they can do with this storyline. Perhaps it’s time to get the ball rolling on Dina’s exit and give her a proper sendoff.

On Twitter, many Y&R fans remain curious about Dina and want to see how the show handles the tough road ahead. “What is going on with Dina?” one viewer asked on Twitter. “Can we have her story continue to a logical & compassionate finale or have we forgotten her?” “I wonder if 2020 story for the Abbotts gonna still be about the Dina saga?” another fan tweeted.

Naturally, there are mixed feelings about this Alzheimer’s story in general. Some fans feel it’s touching and true to life while others wish Y&R would’ve done something else for Dina.

“The Alzheimer story was unnecessary,” a fan insisted. “Dina was much more valuable as an intelligent feisty 80 yr old who ran a company. That would have been a much better story to promote. Encourage viewers don’t depress them!” “Y&R has tackled some pretty heavy stuff over the years and done it well,” another fan pointed out.

We can only hope The Young and the Restless writers handle the end of Dina’s story the right way! It’s sure to be heartbreaking when that day comes, but all the actors involved should deliver some powerful performances. We’ll give you updates as more news becomes available. Y&R fans will want to drop by CDL often for Young and the Restless spoilers and shockers!