The Young and the Restless Spoilers: Elena Alone & Pregnant – Nate Declares Love, Promises To Raise Baby Even if Devon’s Dad? 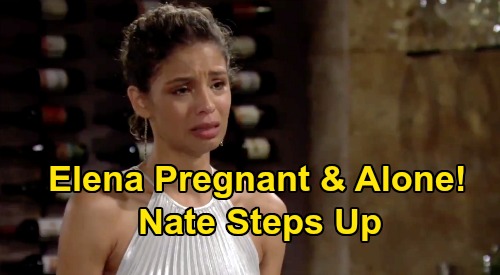 The Young and the Restless spoilers tease that Elena Dawson (Brytni Sarpy) is having a terrible time right now. As Y&R viewers know, the truth has come out about Elena and Nate Hastings’ (Sean Dominic) affair in a very big way, and Devon has kicked Elena out of his penthouse.

Elena is torn up about the whole thing, since Devon was her life, but we suspect that Elena’s problems could get even worse from here.

Given that a big point was made to show that Elena slept with both Nate and Devon within the same general timeframe, we suspect that Elena will end up discovering that she’s pregnant within the next few weeks.

Of course, by that time, it’s hard to say exactly where Elena will stand relative to Nate and Devon, but we have to say that Devon seemed pretty sure about dumping Elena.

And then there will be another wrinkle, when Nate reveals that he’s got feelings for Elena. Elena won’t want to hear it, as she’ll still be feeling raw about her breakup with Devon, and she’ll promptly shut down the conversation with Nate, but Nate doesn’t seem like he’ll be one to let Elena just walk away from him.

Nate will want Elena, and let’s face it, deep down Elena may want Nate, too, even though she might not admit it just yet.

Well, if Elena does wind up being pregnant, she’s probably going to spiral even further, and there will of course be a period of time where she won’t know whether Devon or Nate is the father of her baby.

But that might not matter to Nate, who seems like he has real feelings of love and devotion for Elena. As Nate’s pressuring Elena to be with him, Elena might be showing signs of pregnancy that you typically see on soaps – dizziness, near-fainting, nausea, and so on.

In fact, we wouldn’t be surprised if Nate figures out that Elena’s pregnant just by witnessing some of her symptoms as they work together at the clinic. And it probably won’t take Nate much thought to realize that either he or Devon could be the father of Elena’s baby.

If Devon continues to give Elena the freeze out, then Nate will probably step up and take care of Elena during the pregnancy.

Nate might even declare his love for Elena and promise to help her raise the baby no matter who the father ends up being. Over time, Elena might realize that she really feels something for Nate, and that she has for a while now, despite trying to push all those feelings down deep.

Instead of ending up alone and pregnant, Elena might just find out that she’s got a great thing with Nate, if she can manage to get over Devon.

And who knows – by the time that Elena realizes that she’s pregnant, Devon could be moving on with Amanda Sinclair (Mishael Morgan), which certainly seems to be where this storyline is headed.

Elena may have no choice but to move on from Devon, if Devon starts getting close to Amanda in short order.

One thing’s for sure – if Elena does end up pregnant, there’s going to be some high drama as Nate and Devon wait to see who the father is! Do you think that we’ll be looking at a “who’s the dad” storyline soon?

Stay tuned to the CBS soap and remember to keep CDL at the ready for all the latest Young and the Restless spoilers, updates, and news. We’ve got you covered!