The Young and the Restless Spoilers: Elena & Lola Both Pregnant – New Friends Plan To Raise Babies In Same Apartment? 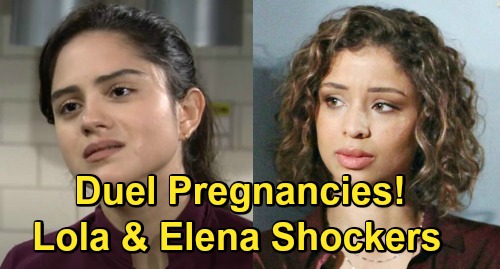 The Young and the Restless spoilers tease that Elena Dawson (Brytni Sarpy) and Lola Rosales (Sasha Calle) have become fast friends, and they soon could be sharing a lot more than just an apartment.

Elena and Lola have had a girls’ night out and they seem to be helping each other through some tough times, which is great to see. But we sense the distinct possibility that Elena and Lola may have some big life changes to bond over soon.

As Y&R viewers know, the show made a big point to show that Elena was intimate with both Devon Hamilton (Bryton James) and Nate Hastings (Sean Dominic) within the same general timeframe.

It seems that Elena may be facing an unintended pregnancy and a contentious “who’s the father” storyline coming. That would certainly complicate things with her new living arrangement with Lola, who might not be up for a new baby in the apartment!

But speaking of Lola, she’s actually a prime candidate for an unintended pregnancy herself, when you really think about it.

Lola and Theo Vanderway (Tyler Johnson) slept together once, and now’s right about the time when Lola would probably find out that she’s pregnant, if indeed the show did go in that direction.

Of course, Lola has since dumped Theo big time and has been all about a fresh start lately, which could mean that a pregnancy is coming! What a situation it would be for both Lola and Elena to discover that they’re pregnant at the same time.

Of course, for Elena, she’d have the added complication of not being sure who the father of her baby is, while Lola would realize that the guy that she wants nothing to do with is going to be tied to her forever.

The possibilities for drama would be pretty great!

We could see some authentic and honest discussions early on about how Elena and Lola feel about their pregnancies and the fathers of their babies, as they decide what they’re going to do about the situation.

Elena and Lola could even plan to raise their babies together in the apartment. Of course, if our dual pregnancy theory were to come to fruition, then the babies’ fathers (or potential fathers, in the case of Elena) would certainly want to help out and be a part of the process, but we could totally see Elena and Lola decide that they’re going to handle the situation on their own with some serious girl power.

We’ll see what happens here, but there’s definitely the potential for a great storyline here about two moms-to-be who take control and rely on each other for support!

Do you think that Lola and Elena will each wind up pregnant? Stay tuned to the Young and the Restless and don’t forget to check CDL often for the latest Y&R spoilers, news, and updates. We’ve got you covered!

From Bold and Beautiful to Young and Restless, Sally Spectra comes to Genoa City this Tuesday on #YR! ❤️ Don’t miss @TheCourtneyHope‘s debut this week. 👏 pic.twitter.com/meMXOCH40t