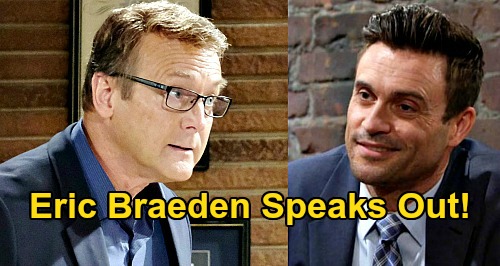 The Young and the Restless spoilers has some news to pass on about a popular Y&R star. Eric Braeden, who portrays Victor Newman on the CBS soap, is pretty outspoken on social media. If you’re fortunate enough to follow Eric on Twitter, then you know that he frequently comments on things that happen on the show, as well things that are going on in the world.

Of course, Eric was referring to Kristoff St. John, who portrayed Neil Winters on Y&R before his passing in 2019, and Daniel Goddard, who portrayed Cane Ashby until he was let go several months ago.

Y&R viewers will remember that Cane went off to try to track down Colin Atkinson (Tristan Rogers) in order to get Devon Hamilton’s (Bryton James) fortune back, and it was a bit of a mystery as to whether Cane was in on Colin’s scam.

And of course, Eric also mentioned Doug Davidson, who portrays Paul Williams on Y&R. Doug is still with the show, but his scenes are few and far between, and both he and Eric have been outspoken about their desire for Paul to be on canvas more often and embroiled in major storylines.

Well, fans certainly appreciated Eric’s tweet, and many of them commented their support for Eric’s words. For example, one fan commented: “Eric, I agree with you 100+%. Y&R isn’t the same without each of these actors being on the show. Kristoff’s passing still saddens me very much. I miss him. And I miss Doug & Daniel too. They’ve been treated so poorly. Why don’t the writers listen to the fans? We want them back!”

And someone else said: “I hope they bring Daniel Goddard back & Doug Davidson should get more air time. Looking back at the old episodes that CBS is airing right no reminds me of the great cast & storylines from the past.”

One follower even offered another actor to the list of people that she misses seeing regularly on the show. “And what about @CJLeBlanc???” this person said. “We miss him working with Victor!”

Of course, this follower is referring to Christian LeBlanc, who portrays Michael Baldwin on Y&R. Michael has been seen less frequented in recent months. Well, Christian promptly responded to that follower’s tweet by saying simply: “YAZ!!!”

Of course, now that Y&R is out of new episodes until after the COVID-19 shutdown ends and the show can go back into production, it’s going to be a while before fans see any action on the show…except for the classic episodes that CBS plans to show during the downtime. We may just see some old classic scenes with Kristoff, Doug, Cane, and Michael, which would be great!

Which characters would you like to see more of on Y&R once the show’s back up and running? Stick with the CBS soap and remember that CDL is your go-to place for the latest Young and the Restless news and updates.