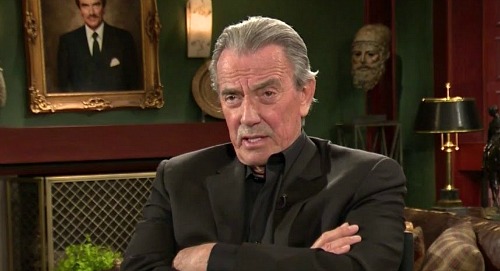 The Young and the Restless (Y&R) spoilers reveal that CBS soap star Eric Braeden, who plays the iconic Victor Newman, is divulging details about what’s happening during the forced shutdown. Y&R had to suspend production for the time being due to the COVID-19 aka coronavirus crisis. Until it’s safe to film again, the cast and crew won’t be shooting at the studio.

On Twitter, a fan tweeted Braeden about getting back to work. That led to another fan chiming in with her own view of the situation. Braeden ultimately replied, “I certainly understand the desire to get back to work! Btw, all of our salaries were cut off as of MARCH 17! Some are alright , but many are in bad shape because of it!! Don’t ASSUME everyone who works in industry gets paid millions! That’s BS!!”

That seemingly caused some tension with the fan he replied to, who insisted she was directing her comments at someone else. “Who said I assume you make millions?” the fan argued in one of her responses. “I said some can afford to stay home and some need to work. Don’t assume they’re protesting because they need a haircut.”

The Twitter user pushed for compassion, but Braeden assured her he had plenty. “TRUST ME, I HAVE SEEN IT ALL IN LIFE AND GREW UP WITHOUT OFTEN KNOWING WHERE THE NEXT MEAL WAS COMING FROM.. if at all!!” Braeden tweeted. He insisted that he had more empathy than she knows and wants the government to support those who need it.

That said, Braeden clearly isn’t pleased with many politicians right now. He’s been voicing his complaints on his Twitter account, so you’ll see some fans who agree and some who disagree. Regardless, Braeden’s the kind of guy who speaks his mind and claps back when he wants to.

Of course, safety has to be the priority at The Young and the Restless. Braeden can’t force them to open up the place and resume filming – nor should he try! The show will get back up and running when they’re allowed, so viewers at home will just have to be patient. Y&R will be delivering some fun theme weeks featuring classic episodes in the meantime.